When farmers speak for middlemen who loot them!

Without these middlemen, the protesters say, there won’t be any fresh investment and the farmers would be worse off – banks insist on farm loans to be used only for farming while loans that local financiers provide can be used for any purpose – and that government is always welcome to write off their debt 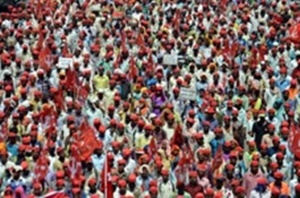 Farmers protesting against the Narendra Modi government’s pro-farmer legislation now say it is the very intent of the legislation – keeping middleman out of agriculture produce marketing – that they are protesting against!
Their demand is simple, repeal all laws intended to keep out middemen and vested interests who cash in on farmer’s difficulties.
It is not the market that matters for the farmers as the government can keep buying at support prices while the middlemen continue filling their pockets.
Of course, there are other ways to compensate farmers, like writing off loans, supplying free electricity, subsidising fertilisers, no-cost insurance etc.
But, so far, no government has taken any initiative to pass legislation to protect the interests of the middlemen, they rue.
The farmers say the middlemen provide quick funds for seeds and fertilisers, and even for family emergencies. They also help grade, weigh, pack and sell harvests to buyers, they add.
Without these middlemen, the protesters say, there won’t be any fresh investment and the farmers would be worse off in the absence of organised wholesale markets as they would have to resort to fire sales.
Banks, they say, provide no alternative to local financiers who often lend without any document that banks insist on.
Also, while banks insist on farm loans to be used only for farming, loans that local financiers provide can be used for any purpose.
And the protesting poor farmers have brought with them enough ration to keep them for at least six months, they claim. They have brought wheat flour, potatoes and other provisions in trucks and tractor trailers and SUVs.
All they want is a repeal of the new legislation that was hailed as the biggest farm reforms in the country in decades and trade analysts have hailed as a booster shot for the world food market.
The laws enacted by Parliament in September will help potential bulk buyers, such as WalMart Inc, and Reliance Industries Ltd to directly with farmers, bypassing local wholesale markets and commission agents down the line.
Simply put, these farmers are protesting to save these commission agents who will lose their jobs. And they have been tutored that the Modi government was trying to privatise agriculture by eliminating these agents and that without these middlemen the farm economy and thousands of farmers will not survive.
It is a vicious chain of miidlemen feeding on farmers and the farmers crying wolf to secure more help from the state to pass on to the middlemen. The protest is against breaking this chain!
MORE REPORTS