The centre on Wednesday announced a major increase in the minimum support prices of all kharif crops for the 2018-19 season, in a move that would give a big boost to farmers’ income. 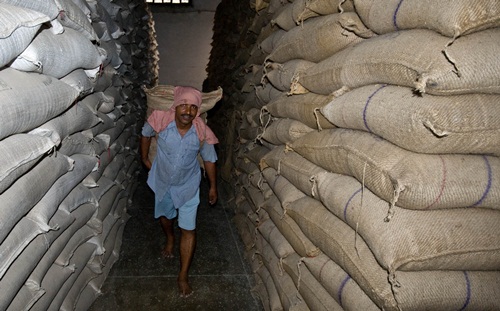 The government’s move to hike support prices of most crops by more than 50 per cent, which will cost the exchequer nearly Rs15,000 crore in public funds, comes less than a year ahead of the next general elections.
Also, assembly elections are due by year-end in three BJP-ruled states — Rajasthan, Madhya Pradesh and Chhattisgarh — where farmers, already restive, form a chunk of the population.
The cabinet announced a steep Rs1,827 per quintal increase in the support price of nigerseed and a Rs1,400 per quintal increase for moong, while the MSP for sunflower has been raised by Rs1.288 per quintal and that of cotton byRs1,130 per quintal. The support price for ragi will go up by Rs997 per quintal while that of paddy has been hiked by Rs200 per quintal.
The Cabinet Committee on Economic Affairs (CCEA) chaired by Prime Minister Narendra Modi on Wednesday approved a steep increase in the minimum support prices (MSPs) for all kharif crops for 2018-19 season.
The decision of the CCEA is a historic one as it redeems the promise of the pre-determined principle of fixing the MSPs at a level of at least 150 per cent of the cost of production announced in the Union Budget for 2018-19, says a cabinet note.
The revision is also in line with the recommendations of the Commission for Agricultural Costs and Prices (CACP).
The Budget for 2018-19 had indicated that a paradigm shift in the agricultural policies is needed to achieve the objective of doubling farmers' income by 2022 through greater emphasis on generating of higher incomes of farmers. The increase in the MSPs of nigerseed at Rs1,827 per quintal, moong by Rs1,400 per quintal, sunflower seed by Rs1,288 per quintal and cotton by Rsl,130 per quintal is unprecedented.
Amongst cereals and nutri cereals, in terms of absolute increase, MSP of paddy (common) has been raised by Rs200 per quintal, jowar (hybrid) by Rs730 per quintal and ragi by Rs997 per quintal. The highest percentage increase in MSP over the previous year is for ragi (52.47 per cent) followed by jowar hybrid (42.94 per cent).
For pulses, apart from moong, MSP of arhar (tur) has been raised by Rs225 per quintal, which translates into a return over cost by 65.36 per cent and that of urad by Rs200 per quintal ensuring a return over cost of 62.89 per cent, in order to maintain inter-crop-price parity.
Similarly, the MSP of bajra has been raised by Rs525 per quintal — a return of 96.97 per cent over cost.
Food Corporation of India (FCI) and other designated state agencies will continue to provide price support to the farmers in the case of cereals, including nutri-cereals.
National Agricultural Cooperative Marketing Federation of India Limited (NAFED), FCI, Small Farmers Agri-Business Consortium (SFAC) and other designated central agencies would continue to undertake procurement of pulses and oilseeds.
Cotton Corporation of India (CCI) will be the central nodal agency for undertaking price support operations for Cotton.
The delay in implementation of a big hike in support prices — one of the pre-election promises of the BJP - has triggered huge protests by farmers in many parts of the country. The opposition had backed the agitating farmers, accusing the government of being insensitive to their demands.
While the move is expected to boost the rural economy, there are concerns that it could translate into food inflation.
Called it a "historic decision" by the NDA government, home minister Rajnath Singh said, "Farmers are the largest producer, consumer and customer in this country but they never got the price they deserved for their produce. Modi-ji understood this and now farmers will get 1.5 times more MSP on their produce."
Besides the increase in MSP of kharif crops, the government says it has taken several farmer-friendly initiatives. The premium rates for crop loans to be paid by farmers have been fixed at a very low (-) 2 per cent of sum insured for all kharif crops, 1.5 per cent for all rabi crops and 5 per cent for commercial and horticulture crops under smart technology through phones and remote sensing for quick estimation and early settlement of claims. The government has also launched a Mobile App 'Crop Insurance’, which will help farmers to find out complete details about insurance cover available in their area and to calculate the insurance premium for notified crops.
The government has also launched a scheme to develop a pan-India electronic trading platform under 'National Agriculture Market' (NAM) aimed at integrating 585 regulated markets with the common e-market platform in order to facilitate better price discovery and ensure remunerative prices to farmers. Each state an electronic, single licence valid throughout the state and a single entry point market fee.
As of 23  March 2018, 585 markets in 16 states and 2 union territories have already been brought on the e-NAM platform.
The government has also formulated a new model Agricultural Produce and Livestock Marketing (Promotion & Facilitation) Act, 2017 to provide farmers market options beyond the existing APMC regulated market yards.
Besides, the government issues Soil Health Cards to farmers across the country. These cards, which will be renewed every two years, provide information on fertility status of soil and a soil test based advisory on use of fertilisers. As on 25 June 2018, the government claims to have distributed 151.4 million Soil Health Cards.
MORE REPORTS