On the eve of Union Budget 2016, Prime Minister Narendra Modi on Sunday urged all states to give priority to implementing the ''roadmap'' for boosting the agriculture sector with a target of doubling the income of farmers by 2022. 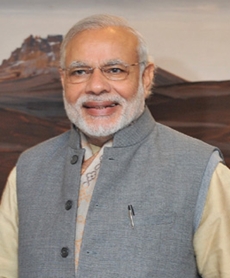 Addressing a farmers' rally in Bareilly, Uttar Pradesh, Modi he sought to hard-sell the recently-launched Crop Insurance Scheme, which he termed as a ''protective shield'', and talked about various other initiatives including plans to launch an e-platform for marketing of agriculture products in April as part of efforts to ensure welfare of the farming community.

''Today, there are several challenges before the farmers  is there no solution to these challenges? These can be converted into opportunities if you (farmers) help me and states implement the various schemes properly,'' Modi said.

Noting that the subject of agriculture is with states, he said. ''The states where some work has been done in the farming sector have witnessed progress. But in the states having the approach of 'chalta hai' (let events take their course) and 'election time pe dekh lenge' (will see at the time of elections), the fate of the farmers has been left to the God. After God, there is nobody to help them.''

Underlining the vision of doubling the income of farmers by 2022, the 75th independence of the country, Modi said, ''From this land of Uttar Pradesh, I urge all the states to give priority to agriculture and then see the changes. The roadmap is there, you only have to implement it.''

He said ''there is no criticism'' of any state and ''there is no need for it'' but he only wants to ''urge'' them with the promise that ''the Centre is ready to work shoulder-to-shoulder'' with them in the implementation of schemes.

He said agriculture should be made employment-oriented to make it attractive to the new generation cultivators as he noted that agriculture, manufacturing and service sectors were the backbone of the country's economy.

Talking about problems being faced by farmers, the Prime Minister said ''filling their pockets with money'' will not suffice and the need is to strengthen their capabilities.

Without make any political comment, Modi referred to the backward Bundelkhand region of Uttar Pradesh and said it was shameful that this belt was parched in spite of five rivers criss-crossing it.

He cited the example of BJP-ruled Madhya Pradesh, saying under the leadership of Chief Minister Shivraj Singh Chouhan, the state has emerged as ''Number 1'' in the agriculture sector for last three years consecutively even though it was nowhere among top 10 about a decade back.

Bundelkhand has of late caught the attention of both opposition and ruling SP as it appeared to become an election issue before the 2017 Assembly polls.

Talking about MNREGA rural job guarantee scheme, Modi, while clearly referring to the previous UPA government, said ''what happened earlier? It was nowhere to be seen. Did you see it anywhere?''

He said the scheme could be used to provide irrigation water by making the ponds deeper, cleaning canals, making new small wells through rainwater harvesting.

''Some states have done it. I will urge more states to do it,'' Modi said.

The Prime Minister, who has been addressing farmers' rallies in different states including Madhya Pradesh, Odisha, and Karnataka over the last few weeks, asked whether a pledge could be taken to double the income of farmers by 2022.

''I am confident that my dream will come true. My dream is your dream. My dream is with your dream. What is my dream? My dream is that by 2022, when the country celebrates its 75th independence day, the income of farmers should double,'' he said, adding ''Can we do it? Can we take a pledge in this regard, the states, the farmers, we all?''

He also spoke of the major problems faced by farmers especially the vagaries of weather, besides fragmented land with poor yield to feed large families. ''These challenges should be converted into opportunities,'' he said.

He advocated a three-pronged strategy under which one-third of the farming activity should be earmarked for traditional crops like paddy, sugarcane, pulses and oil seeds, one-third for poultry, fishery, bee-keeping and one-third for planting trees to get timber.

If this strategy is adopted, farmers would not be left to fend for themselves even if the weather Gods wee angry.

Talking about irrigation facilities, he referred to the Atal scheme for inter-linking of rivers and said ''If there is proper water management, half of the problems of farmers will be solved and they can live a peaceful life.''

For economic development of the country, there should be three pillars - agriculture, industry and service sector, Modi said.

''If industries are not set up, where will sons of farmers get the job. With this we need to promote service sector like tourism, where employment can be generated,'' he said.

The Prime Minister dwelt at length on the Crop Insuance Scheme and highlighted its elements.

The revamped crop insurance scheme is cheaper than the previous one launched in 1999 and modified in 2010. It ensures quick dispute settlements and provides for compensation payment direct into bank accounts.

The new scheme works towards making it more attractive for the farmers. The farmers have now to pay just two per cent of the premium for kharif crop and 1.5 per cent for rabi while the same for horticulture will be fixed at 5 per cent. The balance premium is to be paid by the government both state and central.

India derives about 17 per cent of the Gross Domestic Product (GDP) from agriculture and considering the volatility in farm output due to vagaries of nature often resulting in lower production, the new crop insurance scheme approved by the government is expected to help small and marginal farmers in a big way.

Modi regretted that for the sake of higher yield, massive doses of chemicals and harmful fertilisers were used. ''This atrocity on 'dharti mata' should be avoidedwe have no right to commit such an atrocity,'' he advised the farmers.

Stating that fertiliser shortage and blackmarketing has ended, Modi said earlier the PM Office used to get letters from CMs and most of them were for demanding fertiliser.

''The Centre did not permit blackmarketing of urea. Now no CM writes to me for fertiliser,'' he said.

Modi said on Ambedkar Jayanti on April 14 he would launch national agriculture market ''e-platform'' for farmers enabling them to know market price of their produce through mobile phones.

Earlier, Union Home Minister Rajnath Singh told the gathering that the NDA government had raised the amount of compensation to farmers who suffered due to vagaries of nature.

''We have simplified the process of giving them central assistance,'' he said.