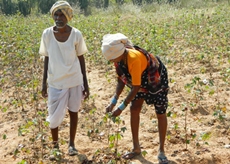 According to the Met department, the monsoon this time will most likely be ''deficient'' and downgraded its forecast from 93 per cent to 88 per cent.

The Australian Bureau of Meteorology, in its updated assessment, has cited a 'weak burst' in the Madden-Julian Oscillation (MJO) wave over the western hemisphere and Africa.

It sees these as signs of crucial level of support for the Indian monsoon emanating from the higher levels of atmosphere.

The MJO wave periodically transits the east African coast and passes over the Indian Ocean en route to the Maritime Continent (Indonesia et al) and the Pacific.

The wave wields profound influence on weather at the ground level by promoting the cloud-building and rains, the weather bureau noted, adding that the timing of the wave bodes well to rejuvenate the setting up clouds and guiding the progression of rain over land.

It has also been associated with triggering storms by setting up low-pressure areas in the seas and helping them to grow in strength.

The Australian Bureau said that the latest burst of the MJO wave follows several weeks of little or no MJO signal in the tropics.

Although the MJO is difficult to detect during an El Nino, the Australian Bureau said most models indicate the MJO is likely to move slowly eastwards into the tropical western Indian Ocean, maintaining moderate strength.

When the MJO is over the Indian Ocean at this time of year, it can enhance monsoonal activity, it added.

While it remains to be seen how global models see the MJO impact over the onset phase, the Australian agency cited Indian Met Department's assessment that the monsoon may break out over Kerala 'within the coming week.'

The arrival of the monsoons has already been delayed in the country's southern tip, Kerala, by about four-five days and large parts of the country are experiencing a severe heat waves that have left over 2000 people dead.

Meanwhile, the NCEP / GFS model of the US Climate Prediction Centre has indicated the possibility of heavy rains over the south peninsula during the week ending 7 June.

However, it will see a drastic reduction in rain the next week, apparently after a low-pressure area in Arabian Sea sprints away to the Oman / Karachi coasts with available moisture.

The rains this time around in any case are not expected to be normal and a ''below normal'' monsoon could potentially toughen challenges for the Narendra Modi government, already battling a farm crisis triggered by unseasonal rains and hailstorms in March-April this year.