The dreaded El Nino weather effect does more than affect monsoon rains – it is actually affecting crop patterns worldwide, according to a new study. 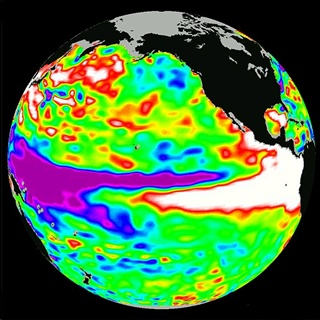 Corn, rice and wheat yields appear to suffer from El Nino weather events, while soybeans may benefit, according to a study led by agricultural-weather researcher Toshichika Iizumi.

An analysis of wheat productivity found global yields for the world's most widely grown grain were on average 1.4 per cent lower than normal in El Nino years, according to the study, published in the journal Nature Communications.

The World Meteorological Organization has seen strong signs of an El Nino event to start later this year, much to the worry of Indian planners in a country heavily dependent on the seasonal rains for its sustenance.

An El Nino occurs every two to seven years and is caused by warmer surface water in the Pacific Ocean, while its counterpart La Nina is associated with cooler years.

An El Nino in 2006 saw a slump in Australia's wheat crop, contributing to a run-up in prices that pushed global food costs to a then record in 2008.

The four studied crops all seem negatively affected by La Nina, the cooler phase of the climate phenomenon known as the El Nino Southern Oscillation.

''The overall impacts of ENSO on global yields are uncertain,'' the researchers led by Iizumi of Japan's National Institute for Agro-Environmental Sciences wrote. ''Our findings highlight the importance of ENSO to global crop production.''

Based on the area harvested worldwide in 2000, about 22 per cent of wheat suffered ''significant'' negative impacts from El Nino, including in south and east Australia, Mexico, parts of China and the northwest US, the study indicated.

El Ninos tend to lead to dry conditions in parts of Australia and Southeast Asia as well as the northern half of South America. Australia's wheat harvest fell to 10.8 million metric tons in 2006-07 from 25.2 million tons, according to the US department of agriculture.

About 24 per cent of corn suffered ''significant'' negative impacts from El Nino, including in parts of the US and China as well as in Mexico and Spain, while 8 per cent benefited significantly, particularly in Brazil and the Black Sea region.

Water temperatures in the tropical Pacific have risen to levels similar with the onset of El Nino, and about two-thirds of climate models indicate thresholds to declare the event may be reached from June to August, the WMO said last month.