The Lok Sabha on Tuesday passed three New Labour Codes that seeks to ensure that half a billion workers, including those in the organised, unorganised and self employed are guaranteed minimum wages and social security. 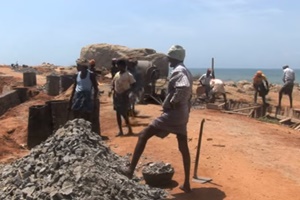 The new legislation seeks to widen social security net of ESIC and EPFO to open it up for all workers and self-employed.
The three bills passed in the Lok Sabha include: Industrial Relations Code 2020; Code on Occupational Safety, Health and Working Conditions Code, 2020; and Social Security Code, 2020.
Bringing workers in the unorganised sector under the labour laws has been part of the government’s efforts to bring much needed labour welfare reforms in the country. The decision was taken after consultations with many multi-stakeholders, including trade unions, employers, state governments and experts of labour sector.
He labour ministry also held nine tripartite consultations, four sub-committee meetings and 10 regional conferences, 10 inter-ministerial consultations and views of citizens.
The Codes provide for setting up of `Social Security Fund’ for 400 million workers in the unorganised sector along with gig and platform workers that will help in widening universal social security coverage, minister of state for labour and employment Santosh Gangwar said while elaborating on the welfare provisions in the Labour Codes. The highlights:
Gangwar, while responding to the debate in the Lok Sabha, stated that the three bills will prove to be a Game Changer in the labour welfare reforms covering more than 50 crores organized and unorganized workers in the country.  This also includes gig, platform and also opens up the doors for social security to those in the self-employment sector.
The minister, while replying to the issues raised by the members of Lok Sabha, said the bills aim at holistic development of the country by keeping labour interest uppermost in the mind. He said these are the people who have suffered most by having multiple laws on labour which involved procedural complexities thereby hindering implementation of various welfare and safeguard provisions. He further said that 29 labour laws are being subsumed in the simplified, easy to understand transparent 4 labour codes. Out of the 4 labour codes, Code on Wages has already been passed by Parliament and have become the law of the land. All the labour laws (29 in number) being amalgamated into 4 labour codes are:
The Wage Code includes four legislations :- The Payment of Wages Act, 1936; The Minimum Wages Act, 1948; The Payment of Bonus Act, 1965; and The Equal Remuneration Act, 1976.
IR Code includes three legislations: - The Trade Unions Act, 1926; The Industrial Employment (Standing orders) Act, 1946; and the The Industrial Disputes Act, 1947.
OSH Code includes 13 legislations :- The Factories Act, 1948; The Plantations Labour Act, 1951; The Mines Act, 1952; The Working Journalists and other Newspaper Employees (Conditions of Service) and Miscellaneous Provisions Act, 1955; The Working Journalists (Fixation of Rates of Wages) Act, 1958; The Motor Transport Workers Act, 1961; The Beedi and Cigar Workers (Conditions of Employment) Act, 1966; The Contract Labour (Regulation and Abolition) Act, 1970; The Sales Promotion Employees (Conditions of Service) Act, 1976; The Inter-State Migrant Workmen (Regulation of Employment and Conditions of Service) Act, 1979; The Cine-Workers and Cinema Theatre Workers (Regulation of Employment) Act, 1981; The Dock Workers (Safety, Health and Welfare) Act, 1986; and The Building and Other Construction Workers (Regulation of Employment and Conditions of Service) Act, 1996
Social Security Code includes nine legislations: - The Employees’ Compensation Act, 1923; The Employees’ State Insurance Act, 1948; The Employees Provident Fund and Miscellaneous Provisions Act, 1952; The Employment Exchanges (Compulsory Notification of Vacancies) Act, 1959; The Maternity Benefit Act, 1961; The Payment of Gratuity Act, 1972; The Cine Workers Welfare Fund Act, 1981; The Building and Other Construction Workers Welfare Cess Act, 1996; and The Unorganised Workers’ Social Security Act, 2008
The government also earlier repealed 12 Labour Acts since 2014.
MORE REPORTS