The union cabinet today approved the Gold Bond and Gold Monetisation schemes, which are expected to help reduce physical holding of the precious metal and mobilise idle gold lying with households, temples and trusts for productive use. 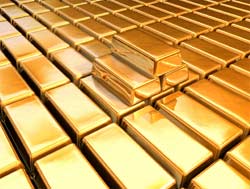 India is estimated to have 20,000 tonnes of domestic stock of gold, which, as finance minister Arun Jaitley stated in his budget speech, is mostly neither traded nor monetised. If the schemes help to mobilise at least a 10 per cent of the idle gold, it would help bring 2,000 tonnes of gold into the open market, to be utilised by the jewellery industry.

The scheme will simultaneously help in reducing the demand for physical gold by shifting a part of the estimated 300 tonnes of physical bars and coins purchased every year for investment into gold bonds.

Since most of the demand for gold in India is met through imports, this scheme will, ultimately, help in maintaining the country's current account deficit within sustainable limits.

''It is safer and economically more stable to go under both these schemes,'' the finance minister said after the cabinet meeting.

Gold bonds will be issued in 2, 5 and 10 grams or other denominations and the tenor of the bond could be for a minimum of 5-7 years so that it protects investors from medium-term volatility in gold prices, Jaitley said.

The scheme will have an annual cap of 500 grams per person and such bonds would be issued for a period of 5-7 years.

''The cabinet today cleared the Gold Bond scheme. Under this scheme instead of buying physical gold, Indian residents can buy the gold bonds,'' Jaitley said.

The Budget 2015-16 had proposed the launch of a Sovereign Gold Bond (SGB) scheme to develop a financial asset as an alternative to gold.

As regards the Gold Monetisation Scheme, the minister said people holding idle gold can deposit it in banks for either short, medium or long term.

He said around 1,000 tonnes of gold is imported annually and people hold such quantum of idle gold just for investment purpose every year.

By taking advantage of gold monetisation scheme, people can deposit idle gold with authorised agencies and take advantage of the price escalation of gold as well as earn interest on the deposit, he said.

The issuance of the Sovereign Gold Bonds will be within the government's market borrowing programme for 2015-16 and onwards. The actual amount of issuance will be determined by RBI, in consultation with the finance ministry.

The risk of gold price changes will be borne by the Gold Reserve Fund that is being created.

The benefit to the government is in terms of reduction in the cost of borrowing, which will be transferred to the Gold Reserve Fund.

The salient features of the scheme are: