Prime Minister Narendra Modi today announced the opening of an estimated 15 million bank accounts across the country, under a massive project that would help provide a bank account for every Indian household. 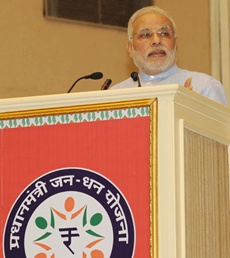 The 15 million bank accounts will come with insurance cover, all in a day, Modi said, adding that it is a big record in the banking history and that the scheme will provide confidence to people.

Modi also declared the beginning of the end of financial untouchability, with the launch of the first comprehensive financial inclusion scheme in the country.

Formally launching the Pradhan Mantri Jan Dhan Yojana (PMJDY) at a function broadcast across the nation from Vigyan Bhawan in New Delhi, the prime minister described the occasion as a festival to celebrate the liberation of the poor from a poisonous cycle (Vish-chakra se gareebon ki aazaadi ka parv).

Speaking at the ceremony, finance minister Arun Jaitley said 15 million accounts will be opened on first day of the scheme.

He said the scheme will be carried out on a "mission mode". The scheme is expected to rope in 75 million accounts by 26 January 2015. The scheme's objective was to eradicate poverty and eliminate the "financial untouchability" that exists in the country, he added.

Modi said the scheme is a big step towards women empowerment as they "can now save their money in a safe place". The PMJDY gives priority to lady of the house.

Elaborating the benefits under PMJDY, the prime minister said the bank accounts offer other benefits, including a RuPay debit card, Rs1 lakh accident insurance cover, and an additional Rs30,000 life insurance cover for those opening bank accounts before 26 January 2015.

He said the account performance would be monitored and overdraft facility of up to Rs5,000 would be given to Aadhaar-enabled accounts after satisfactory operation in the account for six months.

The prime minister said he had written to 7.25 lakh bank employees, exhorting them to help reach the target of 75 million bank accounts and bring freedom from financial untouchability.

Ahead of the launch, RBI had relaxed some KYC norms. In order to ease the process for migrant workers, RBI has allowed users to submit just one address (either current or permanent) as proof. For people, who don't have valid documents, RBI has allowed opening of 'small accounts' through self-attestation.

The small accounts, which will be valid for a year but can be extended for another year, have limitations on credits, withdrawals and balance.