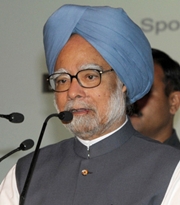 Prime Minister Manmohan Singh today said the government has initiated gas pricing policy reforms in a bid to incentivise production of natural gas even as he said the energy sector cannot be fully out of government control.

''Remunerative energy prices are needed to ensure expanded energy supplies. At the same time since oil and gas are national resources they should be within the framework of government and regulatory oversight,'' the prime minister said at an international energy conference in New Delhi today.

'' The economic exploitation of these resources should lead, therefore, to win-win solutions for both the investors as well as the people of India at large," Sigh said while inaugurating the two-day 7th Asia Gas Partnership Summit of GAIL, organised by FICCI with the support of the International Gas Union.

Expanding the use of natural gas is one of the most important and immediate ways of responding to the challenges of energy security and the management of climate change, the prime minister said.

He said the government has accelerated investment in the creation of LNG re-gasification facilities in order to cater to the large demand for gas in India.