New Delhi:  Iran has informed India it will not yield any ground on the two sticking points holding up agreement on India's participation in the proposed Iran-Pakistan-India (IPI) gas pipeline project. It informed an Indian delegation that any change in the pricing mechanism, the first sticking point, was not feasible nor would it show any consideration on the delivery point, which is the second outstanding issue.

Tired of India's continued prevarication on the issue Iran has also issued a veiled threat, apparently, that it would be quite pleased to divert India's share of the gas to the Gulf region, where there was a heavy demand for the resource.

In the face of continued reluctance from the Indian side to join the project, it has by now effectively become just the Iran-Pakistan pipeline.

According to reports, the Iranian petroleum minister, Masoud Mir Kazemi, apparently informed the Indian delegation that Tehran saw no reason to change its stance on the two sticking points. 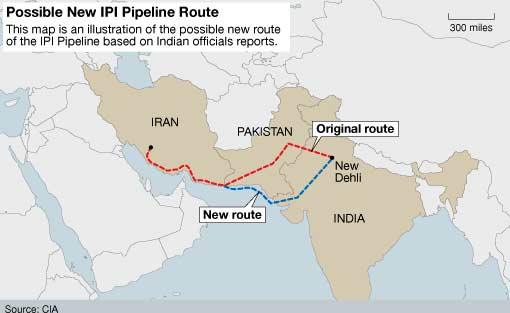 ''The pricing of gas follows a fundamental formula and the price at which Iran buys gas from Turkmenistan and also sells to Turkey and Pakistan could form the base of pricing,'' reports quote Kazemi as saying.

India's decision to join the pipeline project would have to take that formula into consideration, he added.

At the meeting held last December, India said it expects the gas price to be around $4.2 per mBtu, the same it would pay Reliance for gas from the KG D6 field. But Iran's revised pricing formula of 2009 pegs it at $8.3 per mBtu each time crude oil touches $60 per barrel.

The IPI gas had originally been priced at $3.2 per mBtu but was revised to $4.93 per mBtu in 2007 with oil at $60 a barrel, with price revision now proposed every three years, instead of the previously agreed seven.

Tehran also refused to act as a guarantor for delivery up to India's borders arguing that the ''subject of gas transfer depended on India, as it did with Pakistan''. It also insists on a trilateral pact along with Pakistan which would ensure that it would get paid when it delivers gas at its borders with Pakistan, irrespective of supplies reaching or not reaching the intended consumer, in this case India, at the far end of the chain.

Reports also suggest that Kazemi was particularly insistent that India ''should expedite its decisions so that Iran could decide on such (surplus) allocation.'' The minister was referring to the Gulf markets.