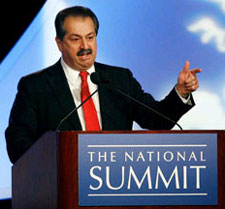 "He is not attending because of his prior engagement," Dow spokesperson told PTI.

Dow washed its hands of any liability for the tragedy which occurred when toxic methyl isocyanate gas leaked from Union Carbide India Ltd (UCIL) pesticide plant in Bhopal, Madhya Pradesh in 3 December 1984, and killed atleast  20,000 people while incapacitating more than 500,000 others.

It is Dow Chemical's case that it bought Union Carbide a decade after this firm had settled its liabilities with the Indian government in 1989 by paying $470 million for the victims.

"We will pursue the case against Dow Chemical (in court) to find out about (its) liability," Jaipal Reddy, the federal urban development minister who is on a newly constituted  Group of Ministers (GoM) panel dealing with the accident, told reporters on Monday.