Edward Snowden, the whistleblower on the US National Security Agency's global surveillance programme, has come out strongly in support of the Indian journalist who exposed the easy accessibility of Aadhaar data, and who now faces police action for his efforts. 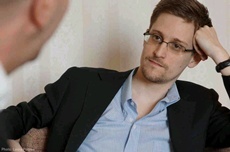 "The journalists exposing the #Aadhaar breach deserve an award, not an investigation," Snowden tweeted.

"If the government were truly concerned for justice, they would be reforming the policies that destroyed the privacy of a billion Indians. Want to arrest those responsible? They are called @UIDAI."

He advised the Narendra Modi government to reform the Aadhaar policy, which he said has compromised privacy of billions of people.

Recently, The Tribune newspaper reported that an administrator login ID and password to gain access to the UIDAI portal could be acquired for as little as Rs500, while software to print any person's Aadhaar card cost a mere Rs300 more (See: Your Aadhaar details are up for sale, price: Rs500).

Following this, a First Information Report was lodged triggering widespread condemnation from all around. This prompted the government to clarify that the FIR was not against the journalist and that it was lodged against "unknown persons" and an investigation is on.

Meanwhile UIDAI has suspended the access of many officials to Aadhaar data after the exposure.

This is, however, not the first time that Snowden has come out against Aadhaar which is being aggressively pursued by the Bharatiya Janata Party government for access to virtually all services, including non-government ones like banking and mobile telephony.

Last week, Snowden had called it ''abuse'' and an outcome of governments' natural tendency to keep tabs on all citizens (See: Snowden calls Aadhaar a 'natural tendency' to snoop on citizens).

Union minister for electronics and information technology Ravi Shankar Prasad on Monday said that the administration was "fully committed to freedom of press" and that the FIR filed is "against unknown".

"Govt. is fully committed to freedom of Press as well as to maintaining security & sanctity of #Aadhaar for India's development. FIR is against unknown. I've suggested @UIDAI to request Tribune & it's journalist to give all assistance to police in investigating real offenders,'' Prasad tweeted.