Snowden calls Aadhaar a 'natural tendency' to snoop on citizens

Edward Snowden, the man who blew the whistle on the US National Security Agency's global surveillance programme, sees India's Aadhaar system as ''abuse'' that is an outcome of the natural tendency of governments to keep tabs on citizens. 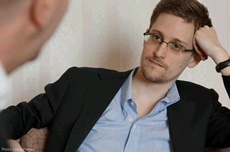 Responding to reports this week that the Aadhaar details of a billion Indians can be bought for as little as Rs500, the former Central Intelligence Agency employee tweeted, "It is the natural tendency of government to desire perfect records of private lives. History shows that no matter the laws, the result is abuse."

An investigation by The Tribune purportedly showed that anyone's Aadhaar information could be bought via WhatsApp for Rs500 paid digitally, while access to software for printing the Aadhaar card costs an extra Rs300 (See: Your Aadhaar details are up for sale, price: Rs500).

Security editor for ZDnet  Zack Whittaker had tweeted, ''India has a national ID database with the private information of nearly 1.2 billion nationals. It's reportedly been breached.''  Snowden re-tweeted Whittaker's post with his comments.

Reports of weak security of the Aadhaar database have surfaced time and again, even as the government goes all out in making the identification mandatory for every service from banking to mobile telephony to even hospital treatment.

A Wikileaks report from mid-2017 also revealed that the CIA may have access to India's entire Aadhaar database.

It was claimed that the Central Intelligence Agency was leveraging tools of US-based technology provider Cross Match (an Aadhaar vendor) for snooping, and that sensitive data could have been compromised.

The UIDAI had then dismissed the reports, and said that such "misinformation was being spread by vested interests".

Meanwhile, a First Information Report has been filed in Mohali from where the access to "purchase" of Aadhaar data was reported.

Officials said they will work with the police to trace the people involved in making the login ID and password available to a private entity.