Hard on the heels of former media adviser Sanjay Baru's book, The Accidental Prime Minister, in which he alleges that Prime Minister Manmohan Singh was rendered toothless by Congress party president Sonia Gandhi (See: Manmohan was 'defanged' by Sonia, says ex-advisor Baru), another ex-bureaucrat, former coal secretary P C Parakh, has made similar allegations in a book to be released today.

In his book Crusader or Conspirator - Coalgate and other Truths, Parakh says Manmohan Singh was heading a government in which he had "little" political authority.

Parakh, who retired as coal secretary in December 2005, recalls that he had submitted his resignation after BJP MP Dharmendra Pradhan had insulted him during a Parliamentary Standing Committee meeting and no response came from the government.

"On August 17, 2005 I met the Prime Minister for a farewell call. I wanted to express my concern at the insult and humiliation that members of Parliament heap on civil servants and senior executives of public service undertakings," he said in his book published by Manas publications.

Parakh, against whom the CBI has registered a case in coal block allocation, said the Prime Minister expressed anguish and stated that "he (Singh) faced similar problems every day. But it would not be in the national interest if he was to offer his resignation on every such issue."

"I do not know if the country would have got a better Prime Minister if Dr Manmohan Singh had resigned, instead of facing the humiliation of his own ministers not implementing or even reversing his decisions.''

Parakh has detailed how despite the PM's consent to competitive bidding in allocation of coal blocks, the matter was delayed by the Prime Minister's Office and his ministers Dasari Narayan Rao and Shibu Soren until Parakh retired, and then the whole idea was dumped.

"It is unfortunate that while the PM was keen on implementing open bidding, he was unable to counter vested interests within his government and the party," Parakh says in the book.

Lamenting the PM's helplessness, Parakh says, "By continuing to head a government in which he had little political authority, his image has been seriously dented by 2G and Coalgate although he has a spotless record of personal integrity." 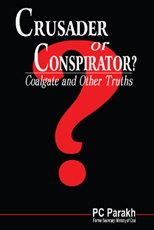 Read together with Baru's book, Parakh's claims reinforce the idea that the PM was not in full control of his government and comes across as a second refutation of the Congress narrative that the party and its chief Sonia Gandhi maintained an arm's length from the government.

Parakh held the comptroller and auditor general's (CAG) presumptive loss figure of Rs1.86 lakh crore in the coalgate scam to be "conservative" and criticised the government, in particular the PM, for attacking the auditor.

Parakh said, "The prime minister claimed that allotments through the screening committee were based on the assessment of applicants on several parameters ... hence there was no merit in the CAG observations that the allotment process was not transparent and objective. This argument strikes at the very root of the policy change that the PM had approved after being satisfied that the screening committee route was not objective and transparent."

The book further ripped apart the PM's defence by saying that while claiming resistance from opposition governed states to competitive bedding, Singh did not mention the concerted efforts of Rao and Soren "to obstruct, sabotage and stall open bidding".