Sony is giving its Walkman, once a rage with consumers, a makeover. It unveiled the NW-ZX2 high-definition Walkman this week at the 2015 International Consumer Electronics Show in Las Vegas. 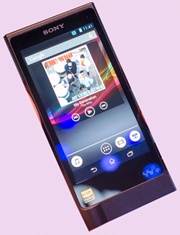 Though the price might seem hefty especially with most music lovers streaming music on smartphones, Sony is however, promising a first class experience that would appeal to audiophiles.

The new Walkman "can reproduce master quality recordings just as the artists originally intended," the company said in a news release.

It also packed plenty of power, which gives users up to 60-hours of MP3 listening time and around 33-hours of high resolution playback -- all from a single charge.

Though the device was not yet available for preorders, according to Sony it should be in consumers' hands sometime during Spring 2015.

This was not the first instance of the return of the Walkman as the company had released the NWZ-A17 Walkman last year at a $300-price. In the '80s and '90s Sony had radically transformed entertainment on the go with the ''Walkman'' and later went on to shake things up with the ''Discman''.

CNN Money reported that the device plays music at super-high resolution, which means songs on Sony's new Walkman sound more life-like than the typical CD, MP3 or streaming media files that are compressed to fit into a smaller, downloadable package.

"The new Walkman ZX2 is a great example of the quality of our high-res audio offerings," said Mike Fasulo, president of Sony Electronics USA, at the Consumer Electronics Show in Las Vegas. "This Walkman is tailored for outstanding sound, and every piece of material and component has been crafted to realize the ultimate high-res audio experience on the move."

However, rather surprisingly the device uses "Jelly Bean," a version of Android that was released in July 2013. The latest Android devices run on software that is two generations ahead of that.

However, with 128 GB of storage NW-ZX2 is pretty spacious and even though music files are larger, that space was enough to pack around 2,000 songs.