Rolls-Royce Motors, widely considered the last word in luxury cars, has joined the autonomous or driver-less car bandwagon, unveiling the concept for its next Vision Vehicle, named103EX. This will be a driver-less vehicle with its own AI-powered assistant / chauffeur called Eleanor. 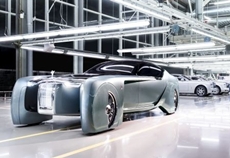 The Rolls Royce 103EX was unveiled at an event in London, and its unusual design received mixed response. According to The Washington Post, one viewer called the car ''butt-ugly'', while another review called it a 'sublimely crazy' idea.

Rolls-Royce 103EX will actually be launched in the market somewhere around 2040, and as a Guardian article points out, the company has not revealed exactly how the car is powered, even though it is claiming zero emissions.

The car has quite an intriguing design nonetheless with ''28-inch tall, narrow wheels upon which the car glides are each hand-built from 65 individual pieces of aluminium'', a luggage compartment that is right next to the front wheels, and automatic door opening and closing at the start and end of a journey.

This driverless vehicle won't have a steering wheel and the seats are replaced by a giant silk sofa. And given this is a Rolls Royce, its cabin has ''finest one-off deep-pile ivory wool carpet woven especially in London, which our passengers can enjoy as they luxuriate in the ample space created by the removal of the chauffeur''.

Given that everyone is talking about virtual assistants, Rolls Royce is replacing the chauffeur with 'Eleanor', who is powered by ''her own artificial intelligence'', according to the press statement, and will work ''intuitively to advise her owners on itineraries, schedules and options before they leave their residence, reminding about appointments and tasks and making suggestions to ease any anticipated impediments''.

And Eleanor will bring the car around when its uber-rich owners are ready to travel, and can ''helpfully but discreetly make suggestions and recommendations''.

The car itself is around 5.9 metres long and 1.6 metres high and has a glass roof - rather, a glass canopy as Rolls Royce calls it.

The ''glass canopy lifts to allow the occupant to stand  the single coach door sweeps open and a step emerges from below the running board. As a final flourish, a red light is projected, carpet-like, from the underside of the step as a welcome. Thus, as in Botticelli's The Birth of Venus, our guest is framed and ready to step gracefully into the limelight and greet their audience.'' So yes, Rolls Royce wants to make the red carpet virtual too.

The company has also announced a Vision 360 CGI to get a closer experience of the Rolls-Royce 103EX on YouTube 360, which is the closest most of us will get to this car.