Japan's Panasonic Corp is planning to invest in Tesla Motors' planned car battery plant in the US, estimated to cost around $980 million, media reports yesterday said. 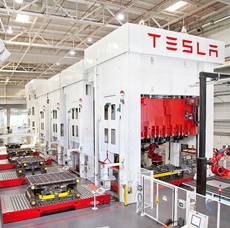 Japan's Nikkei business daily reported that Panasonic is inviting Japanese suppliers to invest in the integrated plant making battery cells for electric vehicles, which is expected to start production in 2017.

The new plant will produce small, lightweight batteries for Tesla and for other carmakers as well, the report said.

In a recent shareholder letter, Tesla Motors CEO Elon Musk had revealed plans of setting up what he calls a "Giga Factory" to build battery packs for its future mass-market electric cars.

His plan is to build a huge factory capable of producing the world's entire current production of lithium ion batteries.

Tesla buys lithium-ion batteries from Panasonic for its Model S electric sedan as well as for its Model X, a performance utility vehicle that is scheduled to go into production by the end of 2014, but it needs to lower battery costs and increase supply for its upcoming mass-market electric vehicle.

Under an agreement signed late last year, Panasonic is to supply nearly 2 billion cells to Tesla over the course of four years, but currently there is an acute shortage of raw materials, which is expected to continue until this year.

The Giga factory would manufacture smaller battery packs for its "Gen 3" model, which are said to be a lot cheaper than its current Model S and is scheduled to be on the road by 2016, and also supply to other car manufacturers like Toyota.