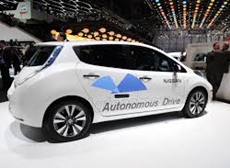 Nissan's all-electric LEAF performed safe autonomous drives across the Ames centre on Wednesday in the presence of Carlos Ghosn, chief executive of Nissan and chairman of the Nissan-Renault partnership, and Jose Munoz, chairman of Nissan North America, Nasa said in a statement on Friday.

The drive demonstrations were conducted with the Nissan representatives as well as Ames director Eugene Tu and associate director Steven Zornetzer.

The Nissan LEAF vehicle is equipped with cameras, sensors and cellular data networking.

"This is a perfect example of technology literally driving exploration and enabling future space missions," he added.

Last year, the US space agency and the automaker Nissan announced a five-year partnership to build self-driving, zero-emission autonomous cars for earth and eventually space.

The partnership allows researchers to develop and test autonomy algorithms, concepts and integrated prototypes for a variety of vehicular transport applications.

Nissan is already testing cars that can navigate urban environments on their own.

The effort can develop technology that will be put to use in passenger vehicles here on Earth and rovers on planets. (See: Renault-Nissan plans more than 10 self-drive cars).