Thanks to the development of the world's first curved smartphone battery, LG electronics India has introduced a curved screen smartphone, G Flex, in India. 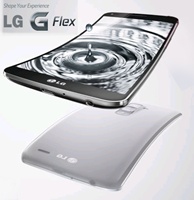 LG said the G Flex is the first smartphone to follow the contours of the human face (See: LG, Samsung to unveil curved smartphones).

The phone comes with an OLED (P-OLED) HD display and a self-healing back cover that eliminates day-to-day scratches and marks of wear and tear, making it the first smartphone to incorporate such technology.

LG says the curved display cuts visual distortion and loss of detail. The G Flex  debuted in October in South Korea. The smartphone is the second such device to have a curved screen, after the Samsung Galaxy round.

The curved smartphone has a 3,500mAh battery, which is also curved, with the keys pushed onto the back of the phone to make it easier for users to adjust settings while taking calls.

Though the exact price of the curved smartphone is yet to be revealed, according to Amit Gujral, head of marketing LG India, the device would come with a price tag of between Rs60,000-65,000, and would be on store  store shelves by February 2014.