More reports on: In the news, Social media

Zuckerberg vows to fix Facebook flaws before polls in India

Facebook founder and chief executive Mark Zuckerberg during his congressional hearing on Tuesday said he wants to ensure protection of integrity of elections, mentioning that he knows the importance of the upcoming polls in countries including India, Hungary and Brazil. 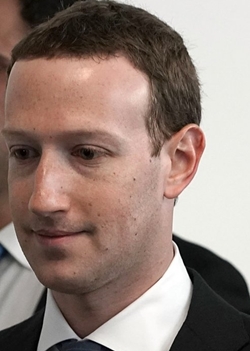 He noted that there are several important elections in 2018 in countries like India, Hungary and Brazil and his company wants to ensure protection of integrity in these elections.
As Zuckerberg faced a joint hearing of the Senate Judiciary and Commerce committees, clad in a navy suit and bright blue tie, outside the Capitol Building on Tuesday sat dozens of cardboard cutouts depicting the CEO of the networking site wearing a characteristic T-shirt emblazoned with the message “Fix Fakebook”.
Zuckerberg, 33, testified before the senators and a House panel amid a storm over the alleged hijacking of data of millions of Facebook users by British firm Cambridge Analytica.
Zuckerberg’s appearance, his first before Congress, turned into something of a pointed gripe session, with both Democratic and Republican senators attacking Facebook for failing to protect users’ data and stop Russian election interference, and raising questions about whether Facebook should be more heavily regulated.
Of specific interest were the revelations that sensitive data of as many as 87 million Facebook users were harvested without explicit permission by a political consulting firm, Cambridge Analytica, which was connected to the Trump campaign (See: Facebook admits 87 mn users data could possibly have been shared).
He publicly apologised for his company's errors in failing to better protect the personal information of its users, a controversy that has brought a flood of bad publicity and sent the company's stock value plunging. He seemed to achieve a measure of success: Facebook shares surged 4.5 per cent for the day, the biggest gain in two years.
It was the first of two marathon hearings; the second will be before the House Energy and Commerce Committees today.
“I think it’s pretty much impossible, I believe, to start a company in your dorm room and then grow it to be at the scale that we’re at now without making some mistakes,”. Zuckerberg said.
Senator Richard Durbin, Democrat of Illinois, zeroed in on the central issue of the hearing, asking Zuckerberg whether he would be comfortable sharing aloud the name of the hotel where he stayed on Monday night, or whether he would be comfortable sharing the names of the people he has messaged this week.
“No. I would probably not choose to do that publicly here,” Zuckerberg said.
“I think that may be what this is all about,” Durbin said. “Your right to privacy. The limits of your right to privacy. And how much you give away in modern America in the name of, quote, connecting people around the world.”
Zuckerberg was the only technology chief in the room, but he was often treated as a stand-in for the whole industry. Facebook has come under intense criticism for the Cambridge Analytica leak and for its initial response, which set off a #DeleteFacebook campaign online and sent the stock plunging more than 15 per cent.
Zuckerberg has disclosed his company is "working with" special counsel Robert Mueller in the federal probe of Russian interference in the 2016 presidential campaign and working hard to change its own operations.
He told the committees that he has not been personally interviewed by Mueller's team, but "I know we're working with them". He offered no details, citing a concern about confidentiality rules of the investigation.
Earlier this year Mueller charged 13 Russian individuals and three Russian companies in a plot to interfere in the 2016 presidential election through a social media propaganda effort that included online ad purchases using US aliases and politicking on US soil. A number of the Russian ads were on Facebook.
During yesterday's at-times-contentious hearing, Zuckerberg said it had been "clearly a mistake" to believe the data-mining company Cambridge Analytica had deleted user data that it had harvested in an attempt to sway elections. He said Facebook had considered the data collection "a closed case" because it thought the information had been discarded.
Facebook also didn't alert the Federal Trade Commission, Zuckerberg said, and he assured senators the company would handle the situation differently today.
He began a two-day congressional inquisition with a public apology for the way Facebook handled the data-mining of its users' data. He took responsibility for failing to prevent Cambridge Analytica, which was affiliated with Donald Trump's presidential campaign, from gathering personal information from 87 million users.
Separately, the company began alerting some of its users that their data was gathered by Cambridge Analytica. A notification that appeared on Facebook for some users on Tuesday told them that "one of your friends" used Facebook to log into a now-banned personality quiz app called "This Is Your Digital Life". The notice says the app misused the information, including public profiles, page likes, birthdays and current cities, by sharing it with Cambridge Analytica.
Zuckerberg had apologised many times already, to users and the public, but this was the first time before Congress. He also is to testify Wednesday before the House Energy and Commerce Committee.
Sen John Thune, Republican Senator from South Dakota and the Commerce Committee chairman, told Zuckerberg his company had a 14-year history of apologising for "ill-advised decisions" related to user privacy. "How is today's apology different?" Thune asked.
Zuckerberg said Facebook is going through "a broader philosophical shift in how we approach our responsibility as a company." He said the company needs to take a "more proactive role" that includes ensuring the tools it creates are used in "good and healthy" ways.
Sen. Orrin Hatch, R-Utah, said Zuckerberg's appearance marked the most intense hearing for a tech company since entrepreneur and businessman Bill Gates testified before Congress in March 1998.
In the hearings, Zuckerberg is trying to both restore public trust in his company and stave off federal regulations that some lawmakers have floated. In his opening statement, he also apologised for his company's involvement in facilitating fake news and Russian interference in the elections.
MORE REPORTS