In an attempt to beat the problems associated with poor or expensive mobile internet access, Facebook will start testing a new video download feature in India. 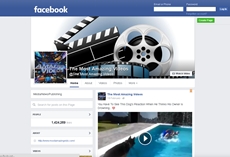 According to TechCrunch, users faced with the problems would be able to sync videos while on WiFi and download them to watch in the Facebook app later.

While Facebook and Mark Zuckerberg had been pitching for getting more people online, the offline feature would serve to address the challenges faced by users in regions with little to no cellular coverage.

The update would also bring some anti-piracy features aimed at video creators - the videos can only be viewed in the Facebook app, and publishers could disable offline downloading from within their Page settings.

Advertisements would not have the option of offline viewing, but Facebook Live was also getting a few feature updates, like a new ability to cut off another team members live broadcast remotely.

Meanwhile, another arm of Facebook was taking a different approach to the problem of spotty cellular service. Facebook's OpenCellular wireless platform, also announced today, that it hoped to help bring another 4 billion people across the planet online. Facebook also had Internet.org's Free Basics apps and also drones and satellites beaming internet to remote places.

Facebook told TechCrunch, ''We've heard feedback that in markets like India, mobile data and internet connectivity is limited and many people struggle with poor video experiences. So we're testing an option for people to download videos to Facebook while they're online on good internet connections, to view the video at anytime, online or offline, without using extra mobile data.''

''People are coming online at a staggering rate in emerging markets and, in most cases, are doing so on mobile''.

''We're continuing to improve Facebook so it works seamlessly and easily for people in all parts of the world, regardless of their device.''