Two and a half thousand years of Indian history will be unearthed in a major new series for BBC Radio 4 and the World Service, presented by Sunil Khilnani, Avantha Professor and Director of the India Institute, King's College London. 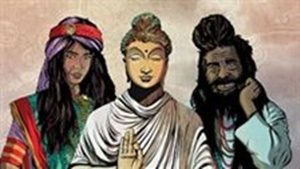 In 'Incarnations – India in 50 Lives', Professor Khilnani will explore the history and present day India through 50 individuals who have shaped the country as we know it today. Starting daily on 11 May, the first part of the series will feature individuals including Gautam Buddha the founder of Buddhidm, Charak; the pioneer of Ayurveda medicine, and Guru Nanak, founder of Sikhism.

Professor Khilnani, author of The Idea of India, has studied the fascinating histories shaping India's emergence as a global power. Over the past year, he has travelled throughout India, recording on location for one of the UK's most popular radio stations.

'Indian history is an unpeopled place'
The series will bring to life an often missing element of Indian history - its people. Figures that have shaped the histories of America, Europe and even China, Professor Khilnani says, are well documented, yet he says, "Indian history is a curiously unpeopled place. Ask most people in the West - and many in India - to name a thinker, ruler, or spiritual leader who preceded the 20th-century trinity of Gandhi, Nehru, Ambedkar, and you're in for some long, awkward silence. What I'm trying to do with Incarnations is fill that silent space, to share with listeners the stories of 50 fascinating, idiosyncratic individuals whose lives shaped not just Indian history, but the social, cultural and political currents of India today."

The first 25 episodes of the series can be accessed from http://www.bbc.co.uk/programmes/b05rptbv from 11 May, daily at 13:45 from Monday to Friday on BBC Radio 4. The remaining 25 episodes will be broadcast in January 2016.