A 10-year-old boy, Ammar Malik, was able to successfully hack the Face ID on each of his parents' new iPhone X. 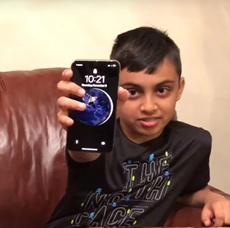 "I was pretty surprised when it happened," said Ammar.

His father, Attaullah Malik, said he and his wife both recently purchased Apple's latest iPhone and they pre-ordered the devices, which arrived on 3 November.

"We opened up the phones, we set them up and we scanned our faces. Ammar walked in, he wanted to check out the iPhone X. My wife said there's no way you can get into my phone and he just picked up one of the phones and he just got right in," said Attaullah.

The ''X'' was launched by Apple with much fanfare, touting its groundbreaking facial recognition technology feature. The phone unlocks for the owner of the device with a glance. Since the release of the device, hackers worldwide have been trying to crack the Face ID technology.

The family was shocked when Ammar picked up the new phone and gave it a try. He was immediately able to unlock the phone. It was not only a one-time effort, he has since been able to unlock it over and over. A video of Malik unlocking the phone was posted to YouTube, and has received over 1.9 million views since it was posted earlier this week.

The father of the 10-year-old said "apparently, TrueDepth camera's depth map of my wife's face, which was created by projecting and analyzing over 30,000 dots, wasn't accurate enough as it worked with my 10-year-old son. He doesn't fall under the ''twins'' exception and has a big age difference compared to my wife. His face is smaller than my wife's face and the geometry of their faces don't match, at least to human eyes."