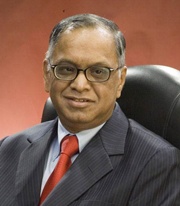 Amidst protests by a section of the board of directors of Infosys following the resignation of CEO Vishal Sikka and some other directors, founder-director N R Narayana Murthy stood his ground and even demanded a full clean-up of the board for the company to regain its lost glory.

Murthy also expressed happiness that Nandan Nilekani has taken over as the chairman of Infosys at a time when the company needed him most. ''I have known Nandan for over 38 years ever since he walked into my office for a job. He is a value-based person. I am confident that the management team and the professionals at Infosys will rally behind Nandan and bring back the glory days,'' he said.

He, however, took exception to the barrage of opinions expressed in the media by various constituents that he said tend to overlook the many time-tested principles of corporate governance that Infosys stood for and which he himself had espoused.

''It is hurtful that this has been directed as a personal attack on me instead of looking at the facts,'' Murthy said even as he suggested more action to move the current good work to take Infosys forward.

He said the core philosophy of corporate governance, which Infosys has demonstrated since 1981, are:

Giving a few key examples of our voluntary effort to be a leader in transparency and corporate governance, Narayana Murthy said, Infosys was the first company in India to give quarterly reporting; first in India to give topline and earnings guidance on a quarterly and yearly basis; and the first in India to adopt the stringent disclosure standards of US GAAP in 1995 much before our NASDAQ listing to give comfort to our global investors. In fact, he said, Infosys was among the first companies globally to file IFRS compliant financials with SEC.

Infosys, he said, proactively disclosed bad news like losing a large customer contributing 25 per cent of our revenue due to price negotiations in 1995.

It also appointed a lead independent director for the first time in Indian corporate history and was the first to introduce a retirement policy and fixed term for all directors, executive or independent. And several more. ''That is how the company achieved a CAGR of 53.9 per cent in market capitalisation over 21 years between 1993 and 2014. Several analysts tell me this is the best performance in the corporate history of India. I hope they are right,'' Murthy said.

Further, he said, ''As far as I know, there is no parallel in the Indian corporate world where founders with significant shareholding voluntarily left their company leaving behind nothing but culture, values and goodwill. Even when I was requested by the board in 2013 to return to the helm of the company, my position was that once I had fulfilled the objectives of my return, I would hand back the reins.''

''Even though the term of my reappointment was five years, I left as soon as Infoscions fulfilled the objectives in just 15 months.

''I am pleased that Nandan Nilekani has taken over as the chairman of Infosys. I have known Nandan for over 38 years ever since he walked into my office for a job. He is a value-based person. I am confident that the management team and the professionals at Infosys will rally behind Nandan and bring back the glory days.

"Let me explain my concerns as a shareholder, whether they have been answered, how they need to be answered in the future, and what the next steps could be.

''My main concern is the poor governance practised by the previous board. The previous board reported in its 20-F in May 2016 and through other communication channels that the company had entered into an unusual agreement to pay an excessive sum as severance to the ex-CFO, Rajiv Bansal, in October 2015. On June 18, 2016, Seshasayee told the shareholders of Infosys at the AGM that the board agreed to pay that sum to Bansal because he was "privy to a lot of price sensitive information as CFOs are". Please note that no previous CFO of the company, nor the current CFO had or have such an excessive severance pay clause in their contracts.

''As there were several adverse media reports, Nandan, the other cofounders and I asked Mr Seshasayee on June 28, 2016 how the board arrived at this strange decision to pay such a large sum as severance. Mr Seshasayee told us that the decision was taken by Mr David Kennedy, the former general counsel. When we probed further whether the Remunerations Committee, the Audit Committee and the board applied their mind to this issue, there was silence from Mr Seshasayee.

"Given such a set of inconsistent responses from the board, would not any concerned shareholder come to the conclusion that the board was not being transparent and was, perhaps, misleading us, the shareholders?

''Furthermore, according to media reports earlier this year the board did not record minutes of the severance to ex-CFO, at the time the decision was taken. This concern was dismissed by the former chairman as a mere "housekeeping" matter. So much for good governance! It gets curiouser and curiouser as Lewis Carroll said in 1865. On February 12, 2017, a whistle-blower complaint appeared in the public media. It questions, in detail, the events surrounding the severance payment made to the ex-CFO.'

"No mention of the transaction with the KMP was made in the press release. KMP transactions [are] to be disclosed as soon as they are entered into."

"We don't know which board member knew about the settlement and who approved and when."

"Why did the chairman not question about the payment or the quantum?"

"Every board member who was involved made false statements about the reason for the ex-CFO's settlement."

"The former General Counsel started an investigation into the allegations made by the ex-CFO. Why did they pay ex-CFO before investigation was complete?"

"The former General Counsel wrote mails to the CEO as to how the entire thing will get revealed."

"In the AGM in July, Seshasayee lies about the reason for payments made to the ex-CFO claiming it was made in consideration of his long service and to protect the company from its secrets being compromised. In reality, it was paid to protect the secrets of the CEO and the board."

"Please note these are the allegations of the whistle-blower. Hence, the engagement that I have had with the board has primarily been about corporate governance and it is surprising to hold somebody raising questions on these serious matters as being responsible for the CEO's resignation. And the very board members to whom I have put forward questions on their governance deficit have instead misdirected it towards the CEO, perhaps to avoid answering my questions, Murthy told shareholders.

Board failed to address Murthy's concerns
On 23 June 2017, the board of Infosys published a "Summary Finding Statement" on the company website following the conclusion of an independent investigation into the allegations made by the whistle-blower. This exonerates the management from allegations regarding benefiting directly from Panaya and other acquisitions.

However, this statement does not mention whether the investigation addressed the allegations of the whistle-blower regarding the serious governance deficits of the board and the CEO in the matter of the severance agreement with the ex-CFO.

''Like any other concerned and logical shareholder of the company, my hope was that the detailed report would contain a full rebuttal of the claims of the whistle-blower that I have quoted earlier. I was also hoping that the full report would point out gaps in governance and suggest corrective actions. These are the only reasons why I asked for the full report to be disclosed.''

But, he said, he is a much relieved man now.

Having worked with Nandan for long, I know that he is a stickler for good corporate governance. Now, we can all sleep better knowing that, under his leadership, the corporate governance standard practised by Infosys will be on par with the global best standard, Murthy said.

''In fact, based on Nandan's media interviews and the recent changes in the board, I believe that corrective actions have already begun. As explained earlier, it is this kind of corrective and decisive action that I was looking for in the detailed report. These actions are now being taken. Therefore, we can all move forward from here and look to the future. I wish Nandan the best of everything in his effort to bring back Acche Din to Infosys.

On protecting shareholder interests, Murthy said the board's main role is protecting the long-term interests of a corporate body. Businesses will always have ups and downs. Business decisions are sometimes taken as bold bets that may not pan out as expected. That is par for the course in any company.

However, when there is a cloud around how the organisation is being governed, we must speak up. This is the key ingredient to keep an institution healthy in the long-run and hold it accountable to all stakeholders. I will not be here forever but I do hope that all of you, shareholders, will speak up, question, and protect this institution.

''Folks, it is not lost on me that the choice I have faced was to keep quiet, not raise these questions, and let the company suffer OR to stand up and ask questions. While keeping quiet may make me seem gentle and "good", it had the potential to mortally wound the company in the long-term. Therefore, I chose to speak up and question because, like every one of you on this call, I wish to see this company flourish as an institution.

''In the final analysis, whatever I have stood for is in the interest of Infosys and the idea that it stands for - that any group of well-meaning people when powered by intellect and driven by values can build a globally respected company with the highest level of corporate governance in India. I am reminded of what John F. Kennedy said, " A man may die, nations may rise and fall, but an idea lives on."