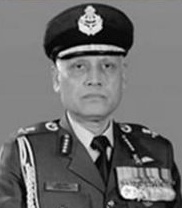 The court granted bail to Tyagi, 71, on a surety of Rs2 lakh. He has been directed not to leave Delhi and the National Capital Region or tamper with evidence in the high-profile case.

The court said it will pronounce its order on the bail pleas of Sanjeev Tyagi and Gautam Khaitan on 4 January. Their judicial custody will continue until then.

Tyagi's defence counsel, while seeking bail last week, told court that former IAF chief was booked and arrested in the case without any basis.

During the hearing of the bail plea, Tyagi's advocate Maneka Guruswamy had said that her client "could not be deprived of freedom if the investigation is taking time to complete".

She also claimed that the CBI has never been able to confront Tyagi with any incriminating evidence till date since the FIR was registered four years ago.

The CBI had opposed the bail plea of the three accused, saying they are persons of high ranking and if released on bail, they "may influence witnesses, destroy evidences and hamper the ongoing probe which is at a very crucial stage".

The agency also told the court that the investigation is going on in the case and CBI was getting support from other countries also.

Additional solicitor general Tushar Mehta, appearing for CBI, had opposed the bail pleas of the accused, saying if set free, they might influence witnesses and hamper the "multi-layered probe by various agencies in more than one jurisdictions involving several countries".

"We have evidence where the meetings unofficially took place for the purpose of crime. At this stage, please do not entertain their bail pleas. Let the probe be completed," he said, seeking dismissal of the bail pleas of all the three accused and adding that the matter has "tarnished country's name".

The CBI had, on 9 December, arrested Tyagi, his cousin Sanjeev Tyagi and a Delhi-based lawyer Gautam Khaitan and had sent them to judicial custody till 30 December 2016 (See: CBI arrests former IAF chief SP Tyagi, 2 others in chopper scam).