Contemporary Amperex Technology Ltd (CATL), the world's largest electric car battery maker, based in the Chinese coastal city of Ningde, has unveiled a new battery which runs on the cheap and abundantly available sodium instead of lithium. 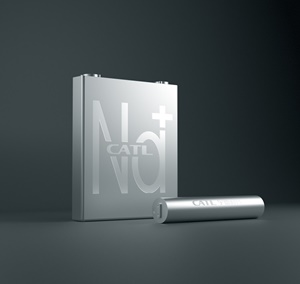 CATL unveiled the company’s first-generation sodium-ion battery, together with its AB battery pack solution - which can integrate sodium-ion cells and lithium-ion cells into one pack - at an online event on 29 July.
“As another milestone of CATL in the exploration of basic science and technology, sodium-ion batteries will provide a new solution for the use of clean energy and transportation electrification, thus promoting the early realisation of the goal of carbon neutrality.” Robin Zeng, chairman of CATL, said.
The sodium-ion battery has a similar working principle to the lithium-ion battery. Sodium ions also shuttle between the cathode and anode. However, compared with lithium ions, sodium ions have a larger volume and higher requirements regarding structural stability and the kinetic properties of materials. This has become a bottleneck for the industrialisation of sodium-ion batteries.
For cathode, CATL has applied Prussian white material with a higher specific capacity and redesigned the bulk structure of the material by rearranging the electrons, which solved the worldwide problem of rapid capacity fading upon material cycling. In terms of anode materials, CATL has developed a hard carbon material that features a unique porous structure, which enables the abundant storage and fast movement of sodium ions, and also an outstanding cycle performance.
Based on a series of innovations in the chemistry system, CATL’s first generation of sodium-ion batteries has the advantages of high-energy density, fast-charging capability, excellent thermal stability, great low-temperature performance and high-integration efficiency, among others. The energy density of CATL’s sodium-ion battery cell can achieve up to 160Wh/kg, and the battery can charge in 15 minutes to 80 pe cent SOC at room temperature. Moreover, in a low-temperature environment of -20°C, the sodium-ion battery has a capacity retention rate of more than 90 per cent, and its system integration efficiency can reach more than 80 per cent.
The sodium-ion batteries’ thermal stability exceeds the national safety requirements for traction batteries. The first generation of sodium-ion batteries can be used in various transportation electrification scenarios, especially in regions with extremely low temperatures, where its outstanding advantages become obvious. Also, it can be flexibly adapted to the application needs of all scenarios in the energy storage field.
CATL's sodium-ion batteries come in the background of huge surge in demand for lithium, cobalt and nickel, which are the key ingredients used in current batteries, Due to increasingly widespread adoption of electric vehicles, car and battery manufacturers across the world are seeking new alternatives to the current three main technologies -- nickel-cobalt-aluminium, nickel-cobalt-manganese and lithium-iron phosphate batteries.
As carbon neutrality has become a global consensus, the new energy industry has entered a complex and diversified development stage. The increasingly segmented markets have raised differentiated requirements for batteries. At the same time, the worldwide research and development of basic materials for batteries is accelerating, which opens a two-way window for the industrialization of sodium-ion batteries.
MORE REPORTS