Croatian EV startup Rimac has just beaten Tesla to the punch by launching the fastest accelerating car in the world. The car, officially christened the Nevera, packs a 120 kwh battery, which sends power to four electric motors with a combined power of a mind-blowing 1888 bhp. 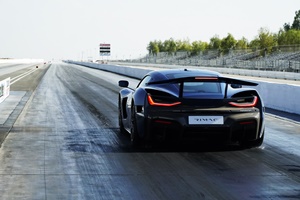 Mevera can propel from a 0 to 100 kmph in just 1.85 seconds. That’s 0.5 seconds quicker than the claimed acceleration figure of the upcoming Tesla Roadster.
The production-ready version of the mystifying Rimac C_Two concept just broke cover, looking remarkably similar to the concept version, which was unveiled at the Geneva Motor Show, back in 2018.
It can touch a top speed of 415 kmph, which is also equally unbelievable. That makes it the fastest accelerating production car in the world, with a top speed that’s a few digits short of the mighty Bugatti Chiron.
Not just this, Rimac claims that it has used the last three years to improve the battery pack’s cooling system, which means that the Nevera will run faster for much longer than expected. In order to ensure that such enormous power don’t end up in a blow-out, Rimac has developed an all-wheel torque vectoring system that basically acts as both an electronic stability and traction control system.
It is also something of an aerodynamic marvel, with body panels which include the bonnet, rear diffuser, underbody plate and spoiler, move independently according to airflow. The Nevera also has a ‘high downforce’ mode and a ‘low drag’ mode, with the former improving stability while cornering etc, and the latter improveing aerodynamic efficiency for straight-line speed.
The Nevera also has electro hydraulic regenerative brakes which work with the battery to provide optimum power. If the battery is too hot, the kinetic energy will be channelled back to the wheel. If the brakes are running hot, more kinetic power will be extracted from them, so the Nevera gets 390 mm Brembo, fade-free carbon-ceramic discs with six-piston calipers which can potentially stop time.
The Nevera also uses the world’s first-ever “steer-by-wire” system featuring seven driving modes, one of which uses artificial intelligence, a bevy of sensors, cameras and radars to offer aural and visual guidance to the driver that allows him or her to best utilise a race track.
Mate Rimac, Founder and CEO said: “Our business started with a BMW 3 Series that I had converted to electric power, which went on to set a number of FIA acceleration records. But what we have produced today is on a completely different level. The Concept_One, back in 2011, was the fastest accelerating EV in the world, running the quarter-mile in 9.9 seconds. We’ve now broken that record with a standard production car by 1.4 seconds. With four independent motors, each individually controlled, we have so much flexibility over how the car accelerates and corners, giving us a huge advantage over any combustion-engined vehicles.
“But Nevera is about so much more than speed. With the largest battery pack ever fitted to a production car, it can travel 340 miles on a single charge. With in-house-developed Rimac All-Wheel-Torque Vectoring 2 it’s as agile as it is fast, and with electrically adjustable dampers and active aerodynamics it’s comfortable and quiet on a cruise, and a performance machine on a track.”
Designed, engineered, tested and manufactured in-house at Rimac Automobili’s global headquarters in Croatia, Nevera’s name proudly carries its Croatian heritage. A nevera is a mighty Croatian storm, known for its speed, ferocity and energy – a fitting name therefore for both the Nevera’s character and ability. Able to transform in a split second from a supple grand tourer to an all-out force of nature, Nevera is charged by lightning much like its namesake.
That means it essentially shows you the fastest way around the track, and the optimum level of throttle and braking input to achieve the fastest lap. The Nevara has a price tag of Rs17.5 crore (excluding taxes).
Nevera’s previous unofficial world record quarter-mile time for a production car was set at 8.62 seconds, earlier this year, during testing in Croatia on an unprepared airstrip. Rimac has now beaten its own record and produced times that can be independently verified by third parties – with lots of performance still to be unlocked through over-the-air software updates.
“This was our first test on a VHT (glued) surface, so we did not know what to expect. At first we were hitting less than expected ¼ mile times (8,7 and 8,8 seconds) than we did on a normal, non-prepped surface in Europe. The track temperature was 65°C and we had to do some adjustments. Our traction control learns the surface on each run and adjusts the torques on the wheels. After some adjustments and different tire warm-up strategies we managed to get better results. Brooks helped with his experience of staging the car and we managed to set the world record for the fastest accelerating production car and also beat our own 1/4 mile record. Still, we are confident that the Nevera has much more to give and that we can go even quicker with more experience and testing on this kind of surface. We will be back,” Miroslav Zrncevic, test and development driver had said during the demonstration.
The Nevera marks a significant win, having proven that when it comes to electric performance, having a century’s worth of manufacturing experience doesn’t mean much all that much in the race to create the supercar, or in this case, the hypercar of the future.
MORE REPORTS