China has launched the world’s fastest train that can reach a speed of  600 km per hour. The magnetic levitation (Maglev) train, which made a debut in Qingdao, China, currently covers a distance of 1,000 km in 2-1/2 hours and is also the fastest ground vehicle globally. 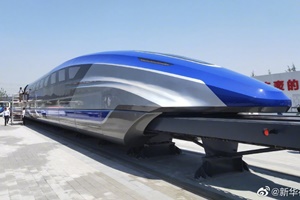 Developed in China, in the coastal city of Qingdao, the Maglev train almost floats in the as it uses ng electromagnetic force, andt “levitates” above the track with no contact between body and rail.
China has been using the technology for almost two decades, with the maximum speed being 350 kmph. The new Maglev train not only achieves near double speeds but also emits low levels of noise pollution and requires less maintenance than other high-speed trains, Chinese media quoted Liang Jianying, deputy general manager and chief engineer of CRRC Sifang, as saying.
It is also safe, reliable and has low noise pollution, small vibration, large passenger capacity, he said, adding that it can fill the speed gap between the current high-speed rail and air travel.
The maglev train is the fastest mode of transportation within the 1,500 km range in terms of actual travel time.
China is focusing on connecting more of its large cities by train to reduce the time and expense required to travel around the world’s most populous country while reducing pressure on air travel.
There is also short-distance Maglev line that runs from one of Shanghai airports to town.
With the new Maglev train, it would only take 2.5 hours to travel from Beijing to Shanghai, a distance of more than 1,000 km. It would take 2-1/2 hours by air.
China is ahead of its competitors in high-speed railway technology, Lu said, adding that China, along with Germany, Japan, the UK, Canada and the US, are the main countries that are engaged in the development of maglev trains.
MORE REPORTS