Samsung on Wednesday launched its second foldable phone and the world's first foldable glass phone, the Galaxy Z Flip, which redefines smart phone with a pioneering a new mobile category. 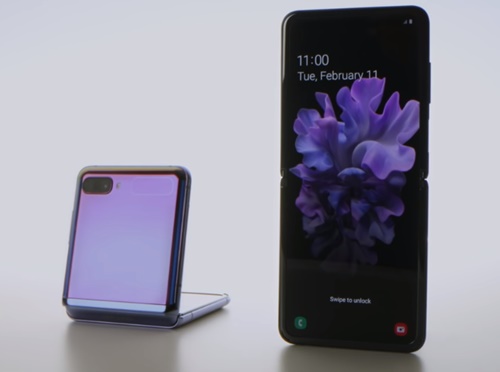 The Galaxy Z Flip, the company’s latest futuristic flagship, features a first-of-its-kind foldable glass display that allows the user to capture, share and experience content.
“When folded, the Galaxy Z Flip is a stylish and compact palm-sized device. When unfolded, it’s a full-sized phone whose stunning, 6.7-inch Infinity Flex Display –Samsung’s first to feature a 21.9:9 aspect ratio – offers users truly seamless multitasking, a company website release stated.
The key highlight of Galaxy Z Flip is its bendable glass as it is for the first time that a brand has used thin bendable glass in a phone. The Galaxy is also the first foldable phone from Samsung to feature a clamshell design.
The device takes on the new Moto Razr foldable phone and will bring back memories of style associated with flip phones. For the first time in mobile phones, Samsung has used thin glass over a flexible display.
The Galaxy Z Flip features Samsung’s proprietary bendable Ultra Thin Glass (UTG). This glass layer makes the device look sturdy and the screen less delicate. Also, repairing the display becomes easier as for deep scratches, just changing the glass layer instead of the entire display will do.
The thin glass layer in Galaxy Z Flip prevents the crease from appearing more prominent. Like in the Galaxy Fold, the plastic screen tends to develop a crease at the place where it folds giving an ugly look. Having a glass layer on the screen prevents this crease (due to the fold) from appearing more prominent.
Samsung Galaxy Z Flip comes with a 6.7-inch screen which folds in almost half. It also features a 6.7-inch FHD+ Dynamic AMOLED Infinity Flex Display with an aspect ratio of 21.9:9 and pixel density of 425 ppi.
There is a small cover display with which you can change music, click selfies when the Galaxy Z Flip is folded
There is a small cover display on the outside which measures 1.06-inch. You can use that small touch display to change music, click selfies when the Galaxy Z Flip is folded. You can get notifications as well on the cover display when the device is folded.
Samsung Galaxy Z Flip can stay open at different angles like a laptop screen.
The Galaxy Z Flip can stay open at a range of angles, like a laptop screen using the Hideaway Hinge system. There’s a new sweeper technology, which uses nylon fibers crafted by micro-height-cutting technology to repel dirt and dust.
Samsung has worked with Google to design a new Flex mode for the phone. When the device is free-standing, the display automatically splits into two 4-inch screens so you can easily view images, content or videos on the top half of the display, and control them on the bottom half. For example, you can watch and navigate YouTube – stream on the top while searching for other videos, reading descriptions and writing comments on the bottom.
Samsung Galaxy Z Flip is powered by a Qualcomm Snapdragon 855+ processor with 8GB of RAM and 256GB of internal storage and runs Android 10-based OneUI interface with backing from a 3,300mAh battery.
Samsung Galaxy Z Flip comes with a total of three cameras
The main display comes with a punch hole notch which hides the 10MP selfie camera. On the outside, there is a dual camera setup with a 12MP ultra wide sensor with F2.2 aperture and a 12MP wide-angle primary camera with F1.8 aperture, OIS, up to 8X digital zoom.
The device can also be folded to 90-degrees and placed on a table to shoot videos or photos.
The device comes with a capacitive fingerprint sensor on the side. There is no headphone jack and Samsung is providing USB Type-C earphones inside the box.
Galaxy Z Flip is likely to be priced lower than Samsung’s first folding phone Galaxy Fold in India, although there is no official launch date yet. The device is priced at $1,380 in the US and is expected to cost less than Rs1,00,000 in India at that rate.
MORE REPORTS