Scientists at the Tel Aviv University and the Shamir Medical Center have reported success in reversing – not just halting midway -  the ageing process by a simple-looking process using oxygen for reenergising cells, not just halting the process midway. 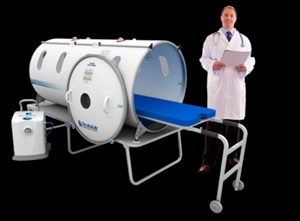 The Tel Aviv researchers have claimed positive results in their research by Hyperbaric Oxygen Treatment (HBOT) – a process of administering oxygen at high pressure levels in a chamber.
Researchers have found that the cellular basis for ageing could possible be reversed, The Jerusalem Post quoted Shai Efrati from the Tel Aviv University, one of the scientists involved in the study, as saying.
“Today telomere shortening is considered the ‘Holy Grail’ of the biology of ageing,” he told The Jerusalem Post.
The scientists were able to achieve “telomere elongation n”, which was able to reverse ageing at the cellular level.
This could insire young scientists to view ageing as a treatable disease, he added.
Another scientist involved in the study - Amir Hadanny from the Shamir Medical Center claimed that  changes in lifestyle and exercise do help in limiting ageing, but that the oxygen based treatment was more effective.
“In our study, only three months of HBOT were able to elongate telomeres at rates far beyond any currently available interventions or lifestyle modifications,” Hadanny said.
HBOT is used to increase the amount of oxygen delivered to body tissues. To do that, the number of oxygen molecules in each unit of air has to be increased; this is accomplished by increasing the atmospheric pressure. When the number of oxygen molecules in the air is increased, more oxygen reaches the lungs and absorbed into the bloodstream. Through the blood the oxygen is delivered to various body organs/tissues while accelerating the physiological healing processes. In addition, by using a certain protocol of treatment crucial regenerative elements occur, such as for example proliferation and migration of stem cells to the damaged tissue, says a release issued by Shamir Medical Centre .
The Chambers at our center can treat 40 patients simultaneosly. The 2 large multiplace chambers are divided into 4 separate pressure chambers, each can be occupied by up to 12 patients. Currently we are treating more than 200 patients on a day to day basis while the duration of the treatment and number of sessions needed for an individual is based on the specific indication.
The treatments are provided from 7 am to 10 pm, thus allowing patients flexibility and convenience when scheduling the treatments as part of their personal daily schedules. In addition, the center has a staff member on call 24 hours per day, 7 days per week, for urgent cases such as smoke inhalation, sudden loss of vision, and diving accidents. “There is no age limit to begin HBOT and we treat patients of all ages, including children under the age of 3 and adults over the age of 90 years,” says the release,
The chambers are built by a German company, HAUX, and include advanced safety systems and a sophisticated control system. The chambers are spacious, modern, and enable a range of innovative treatments including to medically challenging patients.
In addition to the HBOT, Shamir Medical Centre offers comprehensive treatment tailored to the specific medical indication.
According to the researchers, the changes in their physical selves reflected a reversal of 25 years of ageing, at least on cellular basis.
MORE REPORTS