IVRI has released live attenuated classical swine fever cell culture vaccine for indigenous strain, which will help tide over the huge shortfall in vaccine requirement across the country, says a release from the ministry of agriculture and farmers welfare. 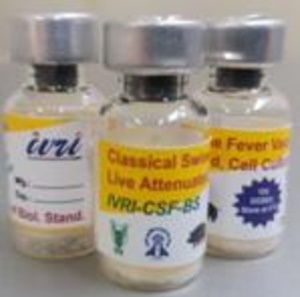 Director General, Indian Council of Agricultural Research (ICAR) Dr Trilochan Mohapatra and secretary, Department of Animal Husbandry and Dairying (DAHD), Atul Chaturvedi released the Live attenuated Classical Swine Fever Vaccine (IVRI-CSF-BS) technology developed by ICAR-Indian Veterinary Research Institute (IVRI), Izatnagar, on Monday.
A live attenuated CSF cell vaccine using an Indian isolate has been developed for the first time. The yield of the vaccine is also 1,000 times more than the existing CSF cell culture vaccine.
An improved Fluorescent Antibody technique has been developed for virus titration.
According to DFAD secretary Atul Chaturvedi, the new vaccine will help CSF vaccination costs to come down sharply.
CSF is one of the most common diseases affecting pigs, causing high mortality with annual loss of approximately Rs430 crore. A lapinized CSF vaccine (Weybridge strain, UK) has been in use in India since 1964 for controlling the disease. The vaccine is produced by sacrificing large numbers of rabbits for each batch.
Chaturvedi said the country’s total requirements is 22 million doses per year and hardly 1.2 million doses are produced per year by the lapinized vaccine, as only 50 doses are produced from a single rabbit spleen.
In order to do away sacrificing of rabbits and increase productivity, IVRI had earlier developed a cell culture CSF vaccine by adapting the lapinized vaccine virus in cell culture. The technology has been transferred to Indian Immunologicals, Hyderabad and Government of Punjab during 2016 and 2018, respectively.
Director, IVRI, Dr RK Singh said since the cell culture vaccine is from a foreign strain (Weybridge Strain, UK), IVRI has further developed a new CSF Cell Culture Vaccine by attenuating an indigenous virulent CSF virus in cell culture. The vaccine virus has very high titre and lakhs of doses can be produced very easily in cell culture and country’s requirement can be easily fulfilled using this new vaccine.
The new vaccine is ready for release and commercial production will be completed in less than a year. The vaccine would be the best choice for use in the CSF control programme (CSF-CP) already launched by DAHD (CSF-CP). Chaturvedi said the new vaccine will be part of the government’s One Health Initiative and result in huge savings as it will nip the spread of the virus at animal stage so that it does not pass on to the human population.
Dr Mohaptra said there is a huge demand for transfer of this vaccine technology from various state governments and private manufacturers and the vaccine has huge export potential, especially Nepal. Due to very high titre of vaccine virus, this vaccine would be the most economical CSF vaccine costing around less than Rs2 per dose as against Rs15-25 of lapinized CSF vaccine and Rs30/dose (approx) for an imported Korean vaccine being used in the country. Besides, the new vaccine gives immunity for two years as compared to 3 to 6 months protection under the vaccines currently being used, he added.
The vaccine is safe, potent, does not revert to virulence and provide protective immunity from day 14 of the vaccination till 24 months studied so far. The vaccine has been tested on around 500 pigs at multiple locations.
The new vaccine has been developed by a team of IVRI scientists consisting of Dr Pronab Dhar, Dr Ashok Kumar Tiwari, Dr M Manu, Dr Vikramaditya Upmanyu, Dr Richa Pachauri and Dr Raj Kumar Singh and a patent application has already been submitted for the new invention.
MORE REPORTS