Over 500 new gene regions that influence people's blood pressure have been discovered in the largest global genetic study of blood pressure to date, led by Queen Mary University of London and Imperial College London. 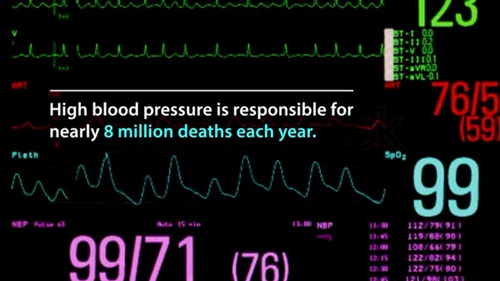 Involving more than one million participants, the results more than triple the number of blood pressure gene regions to over 1,000 and means that almost a third of the estimated heritability for blood pressure is now explained.
The study, published in Nature Genetics and supported by the National Institute for Health Research (NIHR), Medical Research Council and British Heart Foundation, also reports a strong role of these genes, not only in blood vessels, but also within the adrenal glands above the kidney, and in body fat.
High blood pressure is a major risk factor for stroke and heart disease and was responsible for an estimated 7.8 million deaths worldwide in 2015. While lifestyle risk factors are relatively well-known and include obesity, smoking, alcohol and high salt-intake, high blood pressure is also highly heritable through genetics. Prior to this study however, the genetic architecture of blood pressure had not been well understood.
Professor Mark Caulfield from Queen Mary University of London and Director of the NIHR Barts Biomedical Research Centre says, "This is the most major advance in blood pressure genetics to date. We now know that there are over 1,000 genetic signals which influence our blood pressure. This provides us with many new insights into how our bodies regulate blood pressure, and has revealed several new opportunities for future drug development.
"With this information, we could calculate a person's genetic risk score for high blood pressure in later life. Taking a precision medicine approach, doctors could target early lifestyle interventions to those with a high genetic risk, such as losing weight, reducing alcohol consumption and increasing exercise."
Co-lead researcher Professor Paul Elliott from Imperial College London says, "Identifying these kinds of genetic signals will increasingly help us to split patients into groups based on their risk of disease. By identifying those patients who have the greatest underlying risk, we may be able to help them to change lifestyle factors which make them more likely to develop disease, as well as enabling doctors to provide them with targeted treatments earlier, reducing the burden of disease on the health service and increasing people's quality of life."
The team included a large number of international researchers led by the NIHR Barts Biomedical Research Centre, a joint partnership between Queen Mary University of London and Barts Health NHS Trust, and Imperial College London School of Public Health. They analysed the DNA of more than one million people (including almost 500,000 from the UK Biobank cohort*) and cross-referenced the genetic information with their blood pressure data.
By comparing the group with the highest genetic risk of high blood pressure with those in the lowest risk group, the team were able to calculate that all the genetic variants were associated with having around a 13 mm Hg higher blood pressure, having 3.34 times the odds for increased risk of hypertension and 1.52 times the odds for increased risk of poor cardiovascular outcomes.
The study indicates some potential new targets for drug development and suggests that some drugs prescribed for other diseases could be repurposed for treating hypertension. For example, one of the newly discovered gene regions is targeted by the type 2 diabetes drug canagliflozin. Repurposing drugs already known to be safe could be a quick and cost effective way to treat patients who show resistance or intolerance to current therapies.
The team found that some of the new blood pressure genes were already known to be associated with other diseases. For example, the APOE gene is well known for its association with Coronary Artery Disease and Alzheimer's Disease, but this is the first time that it has been detected as having an effect on blood pressure.
Professor Chris Whitty, Chief Scientific Adviser for the Department of Health and Social Care, says, "This large and significant piece of research shows how multiple genetic factors influence blood pressure, providing evidence that is likely to translate into preventative and curative measures for patients in years to come. This collaboration between researchers at four NIHR Biomedical Research Centres exemplifies how NIHR infrastructure pools UK research capacity to support world leading research."
Professor Jeremy Pearson, Associate Medical Director at the British Heart Foundation says,"Having high blood pressure puts you at significantly higher risk of having a heart attack or stroke. Lifestyle factors like not doing enough exercise, being overweight or regularly drinking too much can cause high blood pressure, however our genes can also play a major role. Unfortunately some people simply draw the genetic short straw and must work harder to stay healthy.
"Knowing which genes cause high blood pressure may help us to spot the people who are at risk, before the damage is done. Those at risk can be treated - either with medication or lifestyle changes - potentially preventing thousands of heart attacks and strokes every year."
MORE REPORTS