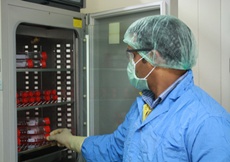 The vaccine has been developed by Bharat Biotech India Limited under an innovative public-private partnership model. It involved partnership between the ministry of science and technology, the institutions of the US government, various government institutions and NGOs in India, supported by the Bill and Melinda Gates Foundation.

This is the third such vaccine available globally against rotavirus and, at the current price of $1 per dose, the cheapest.

Funding by government of India supported basic research in educational and scientific institutions in India. This was also supplemented by the support of US government institutions like the National Institute of Health.

Bharat Biotech India Limited was selected for development and production of the vaccine in 1997-1998 by the India-US Vaccine Action Programme under the standard government procedures. The company has given an undertaken to keep the cost of the vaccine at $1 per dose.

The successful launch of the first indigenously developed and produced vaccine today was the result of an extraordinary effort spread over the last 25 years.

Each year, diarrhoea caused by rotavirus results up to 1 million hospitalisations and kills nearly 80,000 children under the age of 5 years. Besides causing emotional stress to the affected families, it also pushes many Indian families below the poverty line and also imposes significant economic burden on the country.

The prime minister felicitated all the partners in the development of the first indigenous rotavirus vaccine, which involved the complete cycle from basic research to product development of this advanced vaccine in India.