Many anti-cancer agents are insufficient in oral form; a more efficient delivery of these types of drugs could provide better treatment while simultaneously decreasing the serious side effects patients' experience. 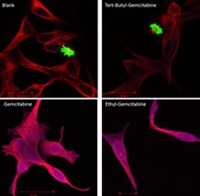 Now, Joseph DeSimone's group at UNC Chapel Hill has created a novel asymmetric bifunctional silyl ether (ABS) prodrug (inactive molecules that when exposed to certain physiological conditions change into the active form) that capitalises on the tunability of the silyl ether chemistry as well as the delivery capability of a nanoparticle to address these challenges.

''Conventional prodrugs are limited by their difficult synthesis, toxic by-products, or lack of tunability,'' says Matthew Parrott, a former post doc in the DeSimone lab. ''Not many people can encapsulate a water soluble drug within a nanoparticle, but the combination of silyl ether chemistry and PRINT  [particle replication in non-wetting templates] allows for the facile incorporation of a water soluble drug within a nanoparticle platform.''

PRINT, a nano-molding technique, lithographically defines features allowing the group to control the shape, size, composition, and surface functionality of their materials.

DeSimone's group previously reported the use of silyl ether cross linkers (C-O-Si-O-C) to synthesise tunable microparticles. These silyl ether linkages were used for various reasons, most notably the tunable rate of degradation, by varying the size of the alkyl substituents on the silicon atom.

The group demonstrated that these particles were internalised within cells and degraded under intracellular conditions into non-toxic byproducts. However, one of the drawbacks with the previous design was the ability to load drugs efficiently; in many cases the drug was lost through diffusion or burst release.

In attempts to create a material to evade these problems, three variations of ABS prodrugs using gemcitabine were made, where the R groups for the silyl ether were ethyl, isopropyl, or tert-butyl groups. As reported in The Journal of the American Chemical Society, the ABS prodrugs were loaded into 200 nm x 200 nm cylindrical nanoparticles using the PRINT technique created by the DeSimone group.

Through in vitro experiments, the group was able to demonstrate that adjusting the steric bulk of the alkyl substituents on the silicon atom could easily control the drug release.

The drug could be released rapidly, with comparable toxicities to the free drug, or slowly, with minimal toxicity regardless of drug loading. These new and ABS prodrugs could lead to the development of nanoparticles with the ability to release drugs specifically at the diseased site in a controlled fashion. This type of treatment would allow treatment of cancer while simultaneously decreasing the negative side effects.

Currently the group is working on fabricating a material that is smaller (50 nm x 50 nm), which is one of the fundamental issues with the current design of many drug delivery systems. This would allow for longer circulation within the body, and thus even better bioavailability.