Indian peafowl crests resonate efficiently and specifically to the same vibration frequencies used in peacock social displays, according to a paper published 28 November 2018 in the open-access journal PLOS ONE by Suzanne Amador Kane from Haverford College, USA, and colleagues. 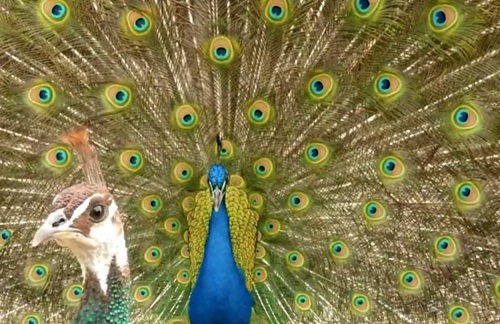 Both sexes of the Indian peafowl (Pavo cristatus) grow a large crest. While many previous studies have focused on the crest as a potential visual signal, this is the first study to focus on crest feathers' potential to sense motion and vibration.
The authors used seven male and eight female crests in the lab for their investigations. They microscopically analysed the crests and confirmed the presence of filoplumes--specialised small feathers appearing across all types of bird feathers and functioning as mechanosensors. The authors then conducted a series of experiments to determine the crests' range of responsiveness to vibration and force. They exposed the crests to simulated displays of wing-shaking, performed by males, and audio recordings of train / tail-rattling, performed by both males and females in social and sexual contexts.
The frequencies used during train- and tail-rattling matched the fundamental resonant vibrational frequency of the crests. The resonant frequencies of similarly-sized feathers from other parts of the peafowl body, or from crest feathers of different bird species, did not match these display frequencies. Additionally, exposing the crest samples to white noise did not result in significant vibration, suggesting the crest feathers have a vibrational response specific to their displays.
The results show that peafowl crests are effectively stimulated by airflow stimuli with frequencies similar to those generated during social displays. The authors suggest that such sensory stimulation might complement auditory and visual perception of social displays, but in vivo behavioral experiments would be required to test this possibility.
The authors add, "Our study explores the hypothesis that bird feathers may have a sensory function during social displays. We studied peacocks because of their enigmatic crests and their use of shaking motions during courtship. We found that the crest feathers of peafowl share many mechanical properties with the sensory hairs of insects and other arthropods known to function as detectors in this context... our results support the hypothesis that feathers may have diverse mechanosensory functions, including during social displays."
MORE REPORTS