Tamil Nadu Agricultural University (TANU) has come out with a Sustainable Sugarcane Initiative (SSI) that could help double sugarcane production using only a fifth of the seed currently being used. 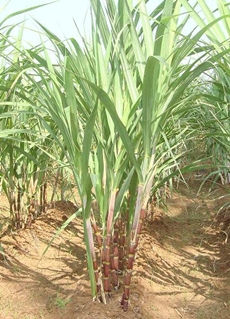 SSI improves productivity of water, land and labour to raise sugarcane production on the lines of the System of Rice Intensification, TANU had launched earlier.

The System of Rice Intensification (SRI) has already been implemented in various parts of the country.

The SSI would improve sugar output by increasing the productivity of water, land and labour, while at the same time reducing the overall pressure on water resources.

While under conventional production methods, 40 tonnes of sugarcane can be produced from one acre of land using 75,000 two budded sets, under the SSI method a farmer would be able to get up to 90 tonnes of millable sugarcane using 12,500 single budded chips.

There would also be a 2.0 per cent increase in sugar recovery - from the present 8.5 per cent to 11 per cent - from cane so produced, Pandian said.

Once commercialised, this method of cultivation could more than double sugarcane production in the country.

India is the world's second biggest manufacturer of sugar after Brazil in terms of both area and production, with an area under sugarcane of 4.1 million hectares and sugarcane production of 355 million tones.

This SSI could also be used for suistainable production of inter-crops like blackgram, greengram, chilli etc, Pandian said.