Felicitated with the Young Woman Achiever Award in October 2018, the MTC Global Outstanding Corporate Award for Excellence in Human Resources during the 6th Annual Global Convention –SANKALP 2016, the Women Achievers Award by World HRD Congress & Institute of Public Enterprise in 2013, and HR Super Achiever Award by Star News at the 20th World HRD Congress 2012 among many others, Aparna Sharma is a passionate learner in her journey of over 22 years of intense and expansive HR work. In her diverse roles, she has successfully been a learning partner, mentor and coach to leaders, leadership teams and organisations to build competencies, learning abilities and nimbleness for achieving purposeful performance.

After completing her post-graduation in Personnel Management & Industrial Relations from Tata Institute of Social Sciences (TISS), Mumbai, she entered  the corporate world through NOCIL and moved into different roles in the HR function in organisations like Monsanto, Novartis, UCB, Deutsche Bank, Lafarge and Greaves Cotton.
A wildlife enthusiast and an amateur photographer, Sharma spends most of her leisure time closer to nature. She also loves travelling as it gives her an opportunity to meet new people.  Books are her favorite ally and she dedicates every day some time to read something new. An avid reader, she has a collection of some of the best books of the century.
She launched her maiden book, Reality Bytes-The Role of HR in Today’s World, which has received wide acclaim across the globe. The book has also been translated in Hindi. Sharma has instituted “UDAAN” Scholarship- A tribute to her late aunt, Late Dr. Mohini D Vyas’ at St Mary’s Convent School in Ujjain where she studied for a couple of all-rounder girl students entering Class X. She also spends time in guiding and coaching students as part of the school’s career guidance efforts. She is also actively involved in adult education through various forums & dedicates time at a couple of old age homes & orphanages in Mumbai.
In this interview with Swetha Amit, she talks about the inspiration behind her book, the challenges that she overcame and how to deal with brickbats in the corporate world. 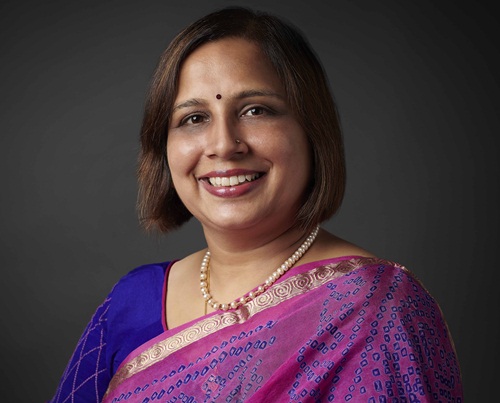 Between U & Me is a compilation of extraordinary stories of ordinary people. So, what really inspired this book?
I had always wanted to write this book. In fact, I wanted to do so after I hang my boots and retire from active work life. The reason I wrote it earlier was when I realised that the world only recognised the rich and famous as their source of inspiration. I kept thinking about the unsung heroes or the ordinary people who touch our lives in different ways. There have been many people who have touched my life and inspired me, both personally and professionally. I wanted to spread the learnings that I have gained from such people to the world and I did not want to delay it any further.  I selected around 20 people but a few of them weren’t comfortable with their stories going public and hence I finally narrowed it down to 14.
I know there are many such books on inspiring stories available in the market. However, they are again inspirational stories of celebrities and famous people. There was also a lot of debate around the title as  Between U & Me sounded romantic. The tag line 'Ordinary People – Extraordinary Lessons' clarified the subject. I also wanted to ensure that the book wasn’t too long as people tend to lose interest easily. It took me six years to pen this book down and I am glad that its finally out in the market for the readers.
Those six years must have come with their share of challenges. How did you overcome them?
Yes, there were quite a few challenges. Firstly, I don’t think anyone would have wanted to publish this especially when I wasn’t a recognised author. However, I managed to channelise my thoughts in a manner where the timing had to be right.
I also had to ensure that it wasn’t a run of the mill kind of a book.  It had to be unique. I had to have numerous discussions with the publisher who wanted to change the title. Each one has a different perspective and according to the publisher, this title sounded intimate.
I also faced some challenges with regards to the time frame.  Some elderly people like Vimla Patil was quite unwell. I already had their drafts and during the interim, some people whom I had earlier chosen to be a part of the book wanted to drop out. So, I had to spend a lot of time finding other inspiring people who were willing to share their stories for my book.
Another challenge was the ability to compress an entire person’s life in just 10-15 pages. From a commercial point of view, a book needs to be of a certain length and I had to adhere to this. When I showed some of the people the first few drafts of their stories, they felt that I had left out some important aspects of their life.  In fact, some of them even insisted on deciding the format. So, I had to convince them saying that the format had already been determined by the publisher.
The last was getting the Foreword for my book. While my publisher was insistent that it had to be done by a celebrity, I had other ideas. However, I did promise that I would try my best and tried to reach out through various sources. After 45 chains of communications over six months, I finally managed to reach Padma Bhushan, Padma Shree Dr Devi Prasad Shetty, the well-known cardiac surgeon who willingly wrote a one-page foreword for me. His life and work are so very inspiring, that he was the best person to endorse this book. 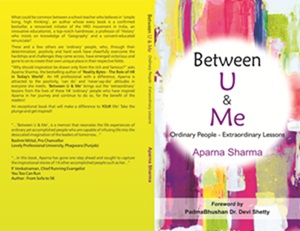