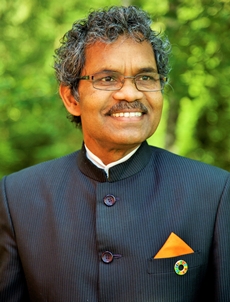 Your story of cycling from India to Europe for love is a remarkable tale of grit, faith and hope. How and when did this story eventually find its way to becoming a book?
During my almost five-month overland journey, I made many European and American journalist friends whom I call "Angels on earth.'' I did their pencil portraits and they wrote articles about me since 1977. Some of them did short films on European TV. Per Andersson (the author of this book) did write an article in the early '90s and published it after few years when he travelled to my village a couple of times.

He did not understand Odia but was fascinated the way I was meeting villagers and school students with joy. He was convinced about writing a book after he saw a documentary on Swedish National television. He researched for six years in order to write this book.

You grew up in an environment where the caste system was largely predominant and you were meted out pretty shoddy treatment. Considering the years have rolled by, how much do you think India has improved with regards to such beliefs and old age customary discrimination?
Well it's been 40 years since I left India. So I am not really sure how much or whether things have changed.  Indians are warm-hearted people and India is a good country but certain old system and beliefs are exerting too much pressures on their personal freedom to act differently.

From sleeping under bridges, rendered homeless and penniless to suddenly emerging as the blue-eyed boy of the Prime Minister Indira Gandhi and finding a place amidst the elite seems like a fairy tale.  What were your feelings during this time?
There were difficult times. However, it helped me learn life's lessons the hard way. But when things started looking up, I knew for certain that I had survived the worst and it was now time to receive the blessings that were being showered upon me.

Many tend to get swayed by sudden success by falling prey to temptations. What made you stay grounded and humble despite your sudden fame and near celebrity status?
I have seen some rough times. My mother's last words on her death bed told me to look after the family, especially my sister. I knew I had to shoulder these responsibilities in order to fulfil my mom's wish. My self-belief and moral support from my family members kept me grounded and rooted to my values all the time. My elder brother was a good painter and, in fact, he was the one who encouraged me to draw and paint.

You took a bold step to cycle from one continent to another despite warnings that it wasn't safe to travel alone. What made you take that plunge? How do you think this journey has changed you as a person?
In the '60s and '70s, the hippies trail was much safer than one can imagine now. There was a bus service (Called Pink Bus) from Sweden to Kathmandu via New Delhi Connaught Place, then parking place, with an old Indian coffee house and  a meeting place. Many countries had no visa system unlike today. Only a few had transit visa and one could get at the borders easily.  With my quick portraits, I managed to make a few stern-faced officers happy, which helped me not only get the transit visa but also food at some places. At that time during my travels, I never really met anyone who gave me an unpleasant experience or whom I disliked.

You have experienced both the worlds of the east and west. What are the differences and similarities you find in both these societies?
I feel us as humans irrespective of which nation we belong to are connected deeply from within. I see more similarities than differences. We are like astronauts and the world is like a natural space ship. Some nations may be better than the others in terms of safety, security and well-being. The better nations, according to me, have definitely cleaned their system from the pollutants and dirt. Other nations still have a long way to go and need to make an effort to cleanse their system for the sake of their citizens.

The book talks about your undying love, grit and tenacity. In an era where relationships are short lived and moving on seems to be the in thing, do you think this book will reinstall faith in long lasting love and long distance relationships?
I am a very optimistic person. Therefore, I hope that my story will bring people together irrespective of caste, race, and social status. Just like Abraham Lincoln made a statement about democracy, I would say the same thing about our love story, which is already dedicated to humanity. Our story has become ''By the people, of the people and for the people. '' I must add one more thing, which is that this story remains with the people in the whole world.

Lastly what message would you like to give your readers and followers?
Just have faith in yourself! Consciously and slowly build a good relationship with yourself.

See book excerpt: Excerpt from The Amazing Story of the Man Who Cycled From India to Europe for Love