A platform for story tellers

Koral Dasgupta is an author, columnist, academic, editorial consultant and artist and an an advisory member of Central Board of Film Certification (CBFC), Mumbai. She recently founded her boutique storytelling platform, www.tellmeyourstory.in;. Her first book titled Power of a Common Man academically analyses the career of Shah Rukh Khan. Her second book, a fiction, Fall Winter Collections is the romantic journey of a sculptor as he works upon his most ambitious project. Her third book is on the editor's table; scheduled to come out in 2017. 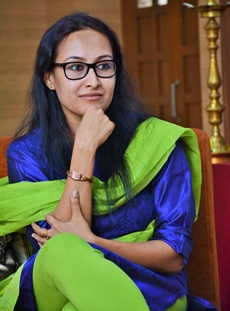 In this interview with Swetha Amit, she talks about the idea behind her new initiative "Tell Me Your Story" and her expectations from it.

"Tell Me Your Story" provides a story-telling platform for professionals from different fields to share their stories. How and when did the idea for this initiative strike you?
As an author I have always felt that there was a gap between writing what you want to write and other people reading and reacting to what you have written. This gap primarily exists not because of the inability of people to absorb what is written but it's because they don't want to read. After the advent of technology, I have seen a decline in the reading and writing habits at an alarming rate as mobile phones seem to have become the chief source of entertainment today. Gone are the days where time was spent in writing a simple letter to someone.

I have also had people asking me numerous questions about being an author; for example a journalist once asked me what my daily routine was. I felt people didn't quite understand that a writer's profession was a full-fledged one, quite contradictory to their perception of a writer's life being glamourous and fun-filled.

Therefore I wanted to give people a glimpse into a writer's life. I also realize that everyone has a story and hence created a platform where everybody could come and share specific stories which are important to them. After this initiative, I now have people coming up and giving me positive feedback about how they really realize the value of a writer as even penning down 300 words seems like a mammoth task to them. So yes, people have a lot to share but did not have a platform where they could do so. The purpose of 'Tell me your story' was to provide them with this platform to share their life stories.

This platform sees its panel of jury, reviewers and editors. Could you tell us more about how you went about selecting these individuals to be a part of your initiative?
Since I am an author, I am acquainted with quite a few people in the literary world. Right now with 'tellmeyourstory' we are just at the beginning phase. I wanted to get those people on board who were actually thrilled about the idea of storytelling and were genuinely interested in reading stories by others'. With regards to the jury, Kiran who is one of them is a high profile author who makes it a point to read every story and give feedback.

Suman Batra, another jury member is also kicked by this entire concept of literary activism and a great friend too. However R.Madhavan coming in as the third jury member was a big boost for our entire team. Honestly I never expected a reply from him, given his celebrity status but he found this whole idea interesting and decided to come aboard. He is one person who stands by his commitment and shares the story of his choice every month on social media, just like how the other jury members do.

With respect to the reviewers, I approached four people whom I had in mind - a journalist, an academic person, an author and a corporate professional. Despite being from four different platforms, they all had a literary bent of mind. As for the editors, I didn't have to approach anyone as they voluntarily came forward to be a part of this venture and I decided to entrust the editorial responsibility to them. As the stories keep coming, I pass it on to the editors who take care of the grammar and fine-tuning it. Sometimes they even talk to the contributors on rewriting their stories. The reviewers write small reviews on the stories of their choice and the jury shares stories of their choice on social media. Of course, their decisions are independent and I don't interfere with their decision making.

What is the profile of the individuals who share their stories on this platform? Could you emphasise more about their backgrounds and age profile?
Most of them are first time authors who are writing because they have been encouraged and told that they can write.  The age group ranges from 9 to 86. The oldest person to contribute is 86 and the youngest is 9. These individuals are from diverse backgrounds and I have made a professional categorisation of the authors such as under-18s, creative media, academic, entrepreneurial category, etc. The trend which I see in these stories so far is that these authors have taken certain instances from their own lives and weaved a story out of it. This resonates well with others across the world who have probably gone through a similar experience and therefore helps in building that connect.

What is the procedure and criteria required for a person to share their story?
We have a well-documented terms and conditions which they have to go through and follow strictly. We also have a submission board where people can submit their stories. These writers are free to write on a topic of their choice. Initially, I was under the impression that only love stories would sell. However, I realised that people are not just looking for the feel-good factor, but real life instances that they can connect to. For instance a lot of individuals often wonder why unpleasant instances happen only to them. This platform is to remove those fixed notions and reassure them that they are not the only ones dealing with tussles and turmoil in the journey of life. Sometimes, there are writers who share nice things that have happened to them which actually exudes joy and that feel good factor.

You have mentioned that the advent of technology today has made people drift away from their reading and writing habits as compared to the pre technology era days. Do you see this initiative of yours help people revive those good old habits again?
My aim is to revive those good old habits and that's the reason why I have started this platform. At the same time I can't say things like I wish that technology never happened. Technology has changed certain things for the better but we must know how to retain that balance and not let it rule our lives. My website for instance is a very technical one and we have ensured that it's a mobile friendly one which people can access on their smart phones. Therefore technology should be channelized in the right direction. However, it should not take over basic communication, which I feel is diminishing and needs to be revived. I am hoping that 'tell me your story'   will revive those reading and writing habits.

Do you see budding authors for the near future from the profile of these people who have contributed on this platform?
Yes in fact there are two such contributors on our platform who are really good and seem to have a wonderful flair for words. I have in fact told them this as I see budding authors in them.

How would you rate the response so far in terms of story contributions?
It's been four months since this platform commenced and the response has been great so far. There have been a couple of entities who approached us on their own for coverage and we then knew that we were doing something right.  Apart from this coverage, I see a marked improvement in the quality of stories coming in.

One thing that we have noticed is that the writers who contribute on our platform are very receptive to the feedback given by the editors with regards to fine-tuning their stories. What happens sometimes is that, we authors tend to play around with language quite forgetting that things need to be contextual. Now, people who are writing for the first time and who possess a love for the language will have the tendency to commit that mistake as well. Therefore, when editors request them to edit those aspects of their stories, they are quite receptive to this feedback and surprisingly do not get offended especially those who are in their teens.

What tools are being incorporated to promote the awareness of this initiative?
We are mainly using social media. Our entire team of the jury, reviewers and editors promote our platform by sharing the stories on all digital platforms. In fact our team of reviewers have invited some of their friends to write for our platform.

I feel each story has marketing potential. For instance, there was this student from Glasgow who had written a poem on a socially relevant topic like the terrorist attack in Nice. Now, this will probably motivate some 10 other people to write on similar topics. I have also spread the word among professors via social media stating that we are looking out for more stories for the youth.

Lastly, what are your future plans for this platform?
Our way of growing this platform is by growing its content. In fact, just recently we have started "Publish the Publisher" which is more about getting a lot of stories the from publishing industry. Unless they are in the literary world, half the people are not aware of the talent that exists within the publishing industry. Talent that gives a lot to both the readers as well as the authors. We authors are nothing without our editors, and editing is such a thankless job. I feel that talent in this particular industry needs to be showcased and I hope to see that in the future through our platform.