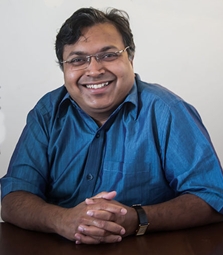 Former chief belief officer at the Future Group, author and leadership consultant  Devdutt Pattanaik has written 30 books and several hundred articles on Indian mythology, culture, business and management.  He is also a  leadership coach, management advisor and consultant on diversity and culture. In this interview with Swetha Amit, he talks about the decision to be a leader or follower in business, the constant greed to attain more and his upcoming business books.

The Success Sutra illustrates Indian beliefs about wealth and success, which play a key role in business and management. What led to the idea of this book, which draws parallels between mythology and management?
A student of mythology is familiar with structures underlying mythologies of the world. Modern management, with its objective-based principles, is based on Western mythologies – the goal of the Greek hero, the Promised Land of the biblical prophet. If management principles can be based on Western mythology why not on Indian mythology, with its understanding of Lakshmi and dharma. That was my question.

Of course, we refuse to accept that Western mythologies influence modern management. We have convinced ourselves that all things western are rational and universal, not cultural.  But that is not the case.

In Sita's example, she is faced with the choice of either being a karta (leader) by exhibiting hospitality or being a karya karta (follower) by not breaching the security of the Lakshman rekha.  So how does one make the choice between being a leader and a follower in business?|
It depends on what risks you want to take. If you want to de-risk yourself, you don't take decisions and restrict yourself to compliance, hence the role of karya-karta. If you take decisions, and the inherent risks, you are karta. While most organisations want their employees to be leaders, they don't want to empower them to take risks. So while they want a set of kartas, they end up with legions of karya-kartas.

In Garud's example in your book, his act of intended kindness unfortunately turned out to be an act of cruelty towards the sparrow. At times in business, a decision taken out of goodwill tends to backfire. How does a leader deal with this mishap and not get bogged down by failure?
If you see the story from the point of view of the serpent, Garuda is the food-provider (anna-daata). Thus it all depends on the point of view. An act of generosity can be seen by another as an act of cruelty by another. The simple fact is that until you burn the forest, you cannot establish a field. You can either make the environmental activist happy, or the seekers of development. There is no escape from a 'crime'. If you wish to be a leader, you have to pay the price for success.

You have said that with each economic revolution, something has to be sacrificed. Going by this theory, at the cost of doing well for society, something bad is also being done simultaneously. Can there ever be 100 per cent good in any business decision that involves development of the country?
If life has to be sustained, some other form of life is devoured. To save the lions, you have to allow the lions to eat the deer. If you want to save the deer, how do you save the lions? There is inherent violence in our actions. We must be aware of it.

We can minimise it by reining in our greed which is rooted in our insecurities. Insecurity breeds greed, which results in inequality. Currently Europe and America, despite being developed and privileged, see themselves as under siege – hence are insecure. They lash out at acts of those people who threaten them. So their desire for security ironically creates more fear and war. The notion of 100 per cent good is an imaginary concept based on a poor understanding of nature, life and wealth. Without bali, there is no bhog.

Your book talks about the aspect of greed where the human mind tends to crave the next level of needs once the basic needs are met. This is especially seen in the corporate world where greed for power and position leads to constant conflict and restlessness. According to you, how does one attain a state of happiness and satiation?
This is seen in every aspect of life. The corporate world simply institutionalises it as shareholders demand quarter on quarter growth. Pension funds in Europe invest in faraway companies and want profit after profit. We admire Google and Facebook because they make so much money – so we fuel the greed of shareholders, and try to compensate by speaking of corporate social responsibility. Happiness does not come from Lakshmi alone. But we assume an 'equal' world will be a 'happy' world. We measure equality based on wealth. That itself is a terribly flawed assumption, but one that governs world polity.

You have mentioned about liminal beings who enable smooth transactions between different categories of people as they are able to see a particular problem from everyone's point of view.  How many such liminal beings actually exist in reality and how do you see them as leaders?
These are people who can serve as interlocutors between seemingly opposite corporate functions: marketing and sales, finance and business development, manufacturing and sales, finance and human resources. They can see multiple points of view and integrate them smoothly.