Pitch it: parallels between cricket and the corporate

IT professional and author Dev Prasad, who has held senior management positions at various American and European multinational firms and worked as a part time freelance copywriter for advertising agencies, says he draws his inspiration from Microsoft CEO Satya Nadella. His debut book titled Krishna was nominated for the 2010 Vodafone crossword award. In this interview with Swetha Amit he talks about his new book, Pitch It!, drawing analogies between cricket and the corporate world

The concept of drawing parallels with cricket and the corporate board room is quite interesting. How did you think of it?
A few years back, I was asked to write a management article for our organisation's e-Newsletter. It had to connect a wide spectrum of employees starting from junior engineers (college graduates) to senior management (CEOs). In a diverse country like India where every state has its own language, culture and cuisine, I realised that the only binding force for the 1.2 billion Indians was cricket.

This made me sit back and think whether it was possible to link the vricketing and the corporate world and whether there was anything common between the two.

On one side was a game played between 22 yards of green turf in front of 50,000 cheering spectators and on the other was the hallowed Boardroom of a top Corporation. I then wrote a two-page article, which became the most read one in the company. It was selected and published by one of the leading newspapers and it received good reviews.  This encouraged me to write a full-fledged book and that's how Pitch It! was born.

How similar do you think life on a cricket field is to a corporate life?
You will be surprised to know that corporate life is probably closer to cricket than many of us realise. Both focus intensely on winning. Players in both are imbued with a sense of mission and a desire to succeed. In cricket, there are strategy and review sessions, team work is the key, and leadership is critical just like in business. Cricket is often seen as a metaphor for life. From batting on a sticky wicket to being on the back foot, the game is full of stories of courage, astute strategy and sheer doggedness.

When a fast bowler is hurling bouncers at 150 kmph, one has no time to duck and could be on the back foot. As a leader, when your company is not doing well and the shares are tumbling, you are on your back foot and busy ducking the questions from your shareholders. And when you are winning, the whole world is behind you, be it a cricket tournament or doubling the share prices of your company.

The more I researched, the more I realised how close both the worlds are. In fact Microsoft's new India-born CEO Satya Nadella has said that he attributes leadership qualities such as building confidence in his team to the lessons he learned while playing cricket. Playing in his school's cricket team taught him important lessons on leadership and teamwork and that knowledge has stayed with him throughout his career.

As mentioned in your first chapter, humility is an important characteristic of a good leader going by the likes of JRD Tata and Sachin Tendulkar. How should any leader retain this trait and not get carried away by success? 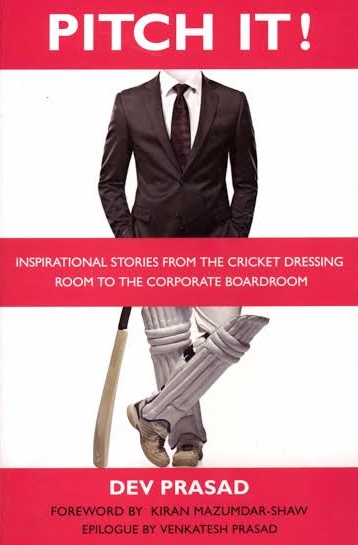 A few years ago, when I worked for Motorola, where every new trainee was given a small card that had two mantras printed on it – ''Constant respect to people'' and ''Uncompromising Integrity''. These two are etched in my mind and will be with me forever. I think we should remember that despite all the records that you set as a cricketer or a corporate CEO, what people remember is the humility that these leaders displayed.

One way to retain this quality is to constantly remain grounded and connected with people. People like Sachin and JRD could connect with all sorts of people ranging from a grounds man or a security guard to a head honcho of a top corporate. That's what sets them apart.

Kiran Mazumdar Shaw set up Biocon in the 1970s at a time when it was rare to see women entrepreneurs. Do you think that would inspire many more such women entrepreneurs, given the rise in the scale of start-up businesses taking place today?
Kiran Mazumdar Shaw is an inspiration not just to women but even to men entrepreneurs. I had the privilege to meet this amazing person. After seeing and reading all the awards, trophies and accolades that she and Biocon had received, I myself came out an inspired person.

Women always have it tough since they have to juggle between a taxing professional life and an equally challenging personal life. That's the reason why I tend to admire women CEOs more than men. I am very pleased that in India, more than 80 per cent of the banks have a woman as the CEO and that's fantastic for our society. I sincerely hope that we see more women entrepreneurs like Kiran in the near future.

Attrition is one of the biggest challenges today any leader has to face such as the situation faced by Chanda Kochchar and M.S.Dhoni. What does it take on the part of a leader to emerge as a winner in such circumstances?
Attrition is a dreaded word today especially in the IT / ITeS industry. Gone are the days when people would join a company and stay till retirement. In a world where an employee gets Loyalty Bonus for serving 3 years in an organisation, we have to constantly provide inspirational leadership to retain good people.

As good leaders, we need to ensure that we provide visionary leadership, empowerment, challenging work content, constant career development and a good work-life balance. However all these will not guarantee zero attrition. So as leaders, we need to have a very good succession planning in place, as described in the case studies related to Australian Cricket Board and General Electric (GE).

It requires tremendous conviction and confidence to refrain from the 'herd mentality' and focus on core competence such as in the case of Porsche and Clive Lloyd. Why do leaders tend to emulate the competitors instead of focusing on ones strengths?
To a large extent, I blame our society and the manner in which we are brought up right from our School days. When a child shows his / her report card to parents, the latter conveniently ignore the child's subjects with high scores and focus only on the low-scoring ones. Parents tend to reprimand the child on the same and constantly question the class teacher on the areas that the child has to improve upon.

The other problem is the constant comparison of their child with other children. They tend to praise other children's performances be it neighbours or cousins and put down their own kith and kin's work.  The high expectations of parents of their young ones becoming a doctor or engineer gives a child no freedom to decide what he / she wants to do.

I think this problem continues when we enter corporate life. There is an overdose of surveys such as the Customer Survey, Employee Satisfaction Survey, IT Survey, Facilities Survey and even Canteen Surveys. Unfortunately all these focus on areas of improvement and rarely on strengths.

Favouritism proves to be a hazard in many fields creating a dent in growth of a team or organisation. Yash Birla's unbiased approach cited in your book depicted professionalism. What can be done to curb favouritism today?
Many companies, especially in India, start off as a family business. The only qualification required to be at the top is to be a relative of the owner. This might work well when an organisation is small. However, as it grows big, it needs to have specialists in each department. The HR department for instance has to be headed by a person with relevant qualifications and experience in the field of HR. Similarly in finance and other roles, the mantra lies in ''meritocracy''.

Every hiring, growth and promotion has to be on merit. When an organisation practices this, it automatically addresses issues related to attrition, employee satisfaction, etc.

In Ganguly and Narayan Murthy's case, they had to take over teams which consisted of big names. How does one deal with inevitable issues like ego clashes and feelings of insecurity while taking on the role of a leader?
There are various leadership styles and as a good leader you need to know which style to adopt in what situation. For example, when MS Dhoni took over a raw and inexperienced team during the inaugural 2007 T20 World Cup (which he won so admirably), he had to guide the youngsters on certain basic attributes like how to keep the scoreboard moving, how to avoid losing cool when an opponent sledges and how to act in crunch situations, etc.

However, Ganguly had to lead stars like Dravid, Tendulkar, Laxman and Kumble. Here his focus would be on maintaining a winning spree, caution against complacency, mentoring, etc.

In the corporate world too, if you are leading a team of junior professionals, the focus is more on operational issues and probably a bit of coaching. However when someone like Narayan Murthy had to lead seasoned veterans like Mohandas Pai, Nandan Nilekani, Kris Gopalakrishnan, etc., his focus would have been in developing a good vision and strategy for Infosys. Empowerment is also vital when you are dealing with senior and competent team members.

How important is winning for a sportsperson/corporate leader in comparison to following ethics or maintaining the spirit of the game?
It is very easy to be ethical when things are going your way. A true test of ethics comes when you are down in the dumps. Let me give you an example. You have scored a mammoth 500 runs and your opposition team is struggling at 178 for 7. Suddenly one of their tail-end batsmen is wrongly given out. You might call him back. However let's now take a case where your team has been dismissed for a paltry 150 and the opposite team is batting at 375 for no loss. One of their top opening batsmen is wrongly given out. Will you recall the batsman? Think about it.

G.R. Vishwanath had no hesitation in recalling Bob Taylor even if it cost India the match. Similarly HP accepted the resignation of Mark Hurd when he confessed to not following the ''HP Way''. Hurd had just amazingly turned around the company and was rated as one of the best CEOs in the world. However, for HP, ethics was more important than share price at the stock market.

Corporate success is not about climbing the ladder but about being able to inspire people, empower them, earn their respect and motivate them to do their best. The stories of individuals, companies and cricketers serve to tell us just how we need to 'play the game'.

In a country where cricket is considered religion, why are fans unable to accept defeat in a sporting manner ?
The problem with some of the Asian countries is that we mix cricket with politics. We treat the cricket ground like a battle ground. As Indians, it is acceptable to get thrashed 5-0 by Australia. However, if we lose just one match against Pakistan, effigies are burnt, slogans are shouted and stones are pelted. I believe that the situation is quite similar in Pakistan.

The only solution to overcome this is to treat cricket as it is meant to be - a game. You can truly enjoy the game only when you are able to appreciate instances of good batting, bowling or fielding from other teams.

Lastly after your inspiring book, do we see any more in the near future?
I am currently working on a fiction book which belongs to 'crime thriller' genre. It should get published later this year.