"I didn't even expect Shiva Trilogy to be published": Amish Tripathi

Amish Tripathi is one the leading novelists in India and the author of the Shiva Trilogy. He quit his 14-year career in banking to become a full time writer. In this interview with Swetha Amit, he talks about his latest book The Oath of the Vayuputras, his passion for mythology and history and the importance of incorporating philosophy in one's life. 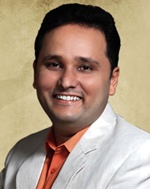 With a background in banking, what inspired you to enter the literary world?
I was always a voracious reader but never had any writing skills, so I never really thought about being a writer.

I was always a left-brain guy and was in banking for 14 years. Suddenly an idea just occurred to me and it was a story which got hold of my soul; so I just had to keep writing.  I know it sounds strange but I completely believe it was Lord Shiva's blessings. I can't think of any other explanation for me to become a writer.

How did the idea to write on mythology come about, considering the fact that not many were writing on this theme?
I was born into a very religious family so I grew up with stories of our Vedas and Upanishads. So the knowledge on mythology was there. However the idea began as a purely philosophy thesis on what is evil.

This ultimately got converted into an adventure to convey that philosophy. I thought the best hero to convey the story of evil is the destroyer of evil himself - Lord Shiva. It was one big story, so it was divided into three parts for convenience.

It had been announced as a trilogy from the first book. The entire story was clear in my mind even before the first book released.

The Shiva Trilogy series has generated a huge readership and fan base; did you expect such a runaway success when you wrote your first book The Immortals of Meluha?
I didn't even expect it to be published. It went beyond what I expected. And I feel it was completely Lord Shiva's blessings. 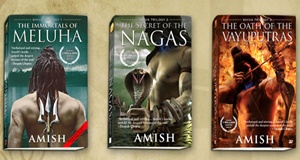 The Oath of the Vayuputras talks about the fact that too much of good can ultimately lead to evil. How does one strike a balance between the two? And sometimes, what may appear evil may not turn out to be what it seems? How does one asses such a situation and arrive at a rational conclusion to follow the right path?

In ancient religions be it Hinduism, Greek or Mesopotamian, one of the core philosophies has always been balance. The world remains stable as long as there is balance.

But you can never have a perfect balance. Perfect balance only happens at the moment of creation after which you slowly move towards perfect imbalance. It's a never ending cycle and the nature of the universe.  So there can never be a perfect answer to this.

Coming to the second part of the question, it all depends on whether you have analysed the situation well enough. In ancient times it was believed that there were caretakers of the society who took care of imbalances purely based on your merit and karma.

However in today's world, we all have to be Mahadevs, and ask ourselves whether we are creating imbalances, destroying our lives and the world we live in?  It's not easy to maintain that balance.

The first step is to make sure you follow the path of philosophy. In ancient times philosophy was the first subject to be studied as people used to believe that learning philosophy means learning how to live your life.

Philosophy is important as it helps you rationalize and think. But unfortunately today it's not a subject that's respected much. I strongly feel Philosophy should be practised. Only then it will make a difference to your life and those around you.

In the first book, Shiva accepts the role of Neelkanth and vows to save the world from evil. Sometimes such choices end up in dire consequences and sacrifices. How difficult is it to make such a decision and stick by it?
It's about discovering your purpose in life and realizing what you were born for.  There is a sloka in the Bhagavat Gita which says that it's better to do your own Dharm even if you make mistakes, rather than doing someone else's Dharm even if you do that perfectly. You cannot allow society or anyone to dictate what your dharm is. It has to be your own decision. And in a way it's the most profoundly selfish and profoundly selfless decision to make; as only you have to decide what you have been born to do.

In your second book, one sees parental rejection due to deformities which could lead to feelings of frustration and enragement. Do you think such emotions play a vital role in fuelling war and bloodshed or can they be healed through love and forgiveness?
There are two approaches to this. In India there is a concept of Vairagya which means that you detach yourself completely from all emotions.  Second way to look at it is that emotions are a part of humanity and you live with it. See it as a way of life but don't allow it to cause chaos.  That's the challenge of life.

Emotions are what makes a person and one cannot deny it.  Love and forgiveness helps many times especially for the person who is doing the forgiving. But at times you need to stand up depending on the situation.

Say for example with regards to the Colonial rule, we could have taken a call to forgive the British and live as second class citizens. But it wouldn't have worked out for us.  So at times like these you need to stand up and fight. By fighting I don't mean resorting to violence but not accepting sins committed upon you. Mahatma Gandhi was a perfect example of a fighter who taught us to fight in a non-violent manner.

Sometimes a friend's actions can create a dent in the trust built over time, such in the case of Brihaspati and Shiva. What is the probability of reviving the old equation again in such a scenario?
I think the best answer to this is from the Philosopher Kabir who has written Rahiman dhaga prem ka, na todo kichikaye, tute se phir ye na judhe, judhe to ganth paad jaye.

It means don't break the string of relationships because though you might be able to tie it up again later, there's still a knot present.  It may not be the same again. So that's Kabirs outlook. But then Brihaspati had to do what he had to do at that point in time.

In a tussle between good and evil, one chooses sides using the head instead of the heart such as the case of Parvateshvar. What makes a man stick by such a decision despite knowing that he's fighting on the wrong side and eventually inviting his death?

Parvateshvar had to ultimately do his moral duty which is to fight for his country. Many times two Dharmas come in conflict with one another. This is referred to as dharm sankat.

For example there may be cases where one has to choose between religion and his country. You may be proud of your religion but you may be devoted to your country.  Practically speaking us Indians mostly will choose our country.

But that doesn't mean it's an easy decision. So that's what Parvateshvar did. He had to choose between neelkanth and devotion to his country which was a difficult choice.  And he ultimately chose his country.

Chapter 45 in The Oath of the Vayuputras is very powerful and reminds one of Abhimanyu's battle amidst the Chakravyuh in the Mahabharata. What does it take to exhibit such valour and grit, when you are at the jaws of death that even fear finds no way to seep through?
There is a warrior spirit that exists among many people and one of the greatest dreams of such people is an honourable death. The warrior spirit doesn't allow them to step back. They would rather die than step back. It's a choice they make.

Look at the Indian army during the Kargil war. Fighting amidst those mountains which are almost impossible to climb showcases their spirit where they will rather die fighting than retreat.

There are such people in our police forces as well. During the 26/11 Mumbai attacks, Constable Tukaram Omble helped us to catch Kasab. I read somewhere that he had 30-40 bullets pierced into him but that didn't make him give up. He still fought bravely. That's the spirit I am talking about.

Now that the Shiva Trilogy series is complete, what can we expect from Amish next?
I haven't decided on my next book but it will certainly be in the space of mythology and history.  These are the areas of my passion so that's what I will keep writing about. And most of my ideas are based around this theme.

The best way to describe this book is that it's the history of India's geography.