The 2022 Nobel Prize in Literature has been awarded to French author Annie Ernaux, “for the courage and clinical acuity with which she uncovers the roots, estrangements and collective restraints of personal memory”. 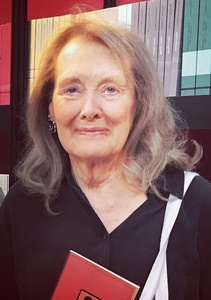 Making the announcement of the award of Nobel Prize in Literature 2022 to Annie Ernaux on 6 October 2022, Mats Malm, Permanent Secretary of the Swedish Academy, said, “It’s a very strong prose, both brief and  uncompromising.”
Born on 1 September 1940, in Lillebonne, France, Annie Therese Blanche Ernaux is a French writer, professor of literature and Nobel laureate. Her literary work, mostly autobiographical, maintains close links with sociology.
Ernaux was born in Lillebonne in Normandy and grew up in nearby Yvetot, where her parents ran a cafe and grocery in a working-class part of town. In 1960 she travelled to London where she worked as an au pair, an experience she would later relate in 2016's Mémoire de fille (A Girl's Story). Upon returning to France, she studied at the universities of Rouen and then Bordeaux, qualified as a schoolteacher, and earned a higher degree in modern literature in 1971. She worked for a time on a thesis project, unfinished, on Pierre de Marivaux.
In the early 1970s, Ernaux taught at a lycee in Bonneville, Haute-Savoie, at the college of Evire in Annecy-le-Vieux, then in Pontoise, before joining the National Centre for Distance Education, where she was employed for 23 years.
Ernaux started her literary career in 1974 with Les Armoires vides (Cleaned Out), an autobiographical novel. In 1984, she won the Renaudot Prize for another of her works La Place (A Man's Place), an autobiographical narrative focusing on her relationship with her father and her experiences growing up in a small town in France, and her subsequent process of moving into adulthood and away from her parents' place of origin.
Early in her career, Ernaux turned from fiction to focus on autobiography. Her work combines historic and individual experiences.
A Woman's Story, A Man's Place, and Simple Passion were recognised as The New York Times Notable Books, while A Woman's Story was a finalist for the Los Angeles Times Book Prize. Shame was named a Publishers Weekly Best Book of 1998, I Remain in Darkness a Top Memoir of 1999 by The Washington Post, and The Possession was listed as a Top Ten Book of 2008 by More magazine.
Ernaux is the 16th French writer, and the first Frenchwoman, to receive the literature prize. In congratulating her, the president of France, Emmanuel Macron, said that she was the voice "of the freedom of women and of the forgotten".
Many of Ernaux's works have been translated into English and published by Seven Stories Press. Ernaux is one of the seven founding authors from whom the Press takes its name.
Ernaux supported Jean-Luc Melenchon in the 2012 French presidential election. In 2018, Ernaux expressed her support for the yellow vests protests.
Ernaux, who has traces of anti-Semitism in her political outlook, has repeatedly indicated her support for the BDS movement, a Palestinian-led campaign promoting boycott, divestment and sanctions against Israel. In 2018, the author signed a letter alongside about 80 other artists that opposed the holding of the Israel–France cross-cultural season by the Israeli and French governments. In 2019, Ernaux signed a letter calling on a French state-owned broadcasting network not to air the Eurovision Song Contest, which was held in Israel that year. In 2021, after the Operation Guardian of the Walls, she signed another letter that called Israel an apartheid state, claiming that "To frame this as a war between two equal sides is false and misleading. Israel is the colonising power. Palestine is colonised."
MORE REPORTS