Former governor of West Bengal and a leading lawyer in Rajasthan, Jagdeep Dhankhar has been elected the new Vice President of India. He will succeed present Vice President M Venkaiah Naidu, whose term ends on 10 August. 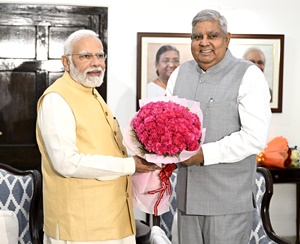 Dhankar,  once a senior counsel at the Supreme Court, has been in politics for over 30 years since the 1990s. Dhankhar had brief stint as an union minister in former Prime Minister Chandrashekhar’s cabinet.
However, after a decade in electoral politics, Dhankhar went into a political hiatus. His appointment as Governor of West Bengal in July 2019.
Dhankhar, a reasonably new face in eastern Indian political circles, has since had several run-ins with the state’s chief minister Mamata Banerjee.
From bringing snooping allegations against the chief minister’s office, to summoning senior officials — including the chief secretary and the director general of police — to Raj Bhavan to seek reports about incidents of violence and issues related to government functioning made Dhankhar an enemy of the ruling Trinamool Congress.
His actions, letters and statements, have always been too sharp for the government to counter them on legal or administrative ground, so much so that leaders of the ruling Trinamool Congress, including the chief minister, used to call him a “BJP leader’ and the Raj Bhavan an “RSS karyalaya.”
As governor, he had traveled across West Bengal, visited accident sports and sites of political violence, rushed to universities in case of any crisis, including Jadavpur University, when the vice chancellor was gheraoed.
While Dhankhar had been criticised by Bengal politicians, all his actions were legally and constitutionally valid.
MORE REPORTS