Droupadi Murmu, the 64-year-old tribal leader from Odisha, scripted history on Thursday, becoming the first tribal woman to be elected President of India, and the first person born after Independence to be elected to the highest office of the country. 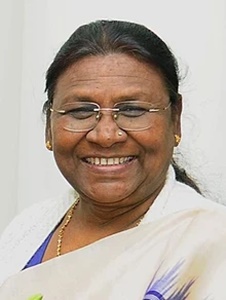 The second woman to be elected India’s First Citizen, Murmu will be sworn in as the 15th President of India on 25 July.
NDA’s presidential nominee, Droupadi Murmu defeated her rival, opposition candidate Yashwant Sinha, by a margin of 947 votes, bagging 64.03 per cent of the electoral college votes against Sinha’s share of 35.97 per cent.
Murmu got the maximum votes from Uttar Pradesh, Maharashtra and Andhra Pradesh, while Sinha gained votes in West Bengal, Kerala  and Tamil Nadu.
Counting of votes in the presidential polls began in Parliament House at 11 am on Thursday and returning officer P C Mody declared Droupadi Murmu the victor after 9.30 pm.
Prime Minister Narendra Modi congratulated  Droupadi Murmu on being elected as President of India.
In a series of tweets, the Prime Minister said; "India scripts history. At a time when 1.3 billion Indians are marking Azadi Ka Amrit Mahotsav, a daughter of India hailing from a tribal community born in a remote part of eastern India has been elected our President! Congratulations to Smt. Droupadi Murmu Ji on this feat."
Born on 20 June 1958 to a Santhal family in Uperbeda village in Odisha's Mayurbhanj district, Murmu  was the first girl in her village to go to college.
Before beginning her career in politics, Murmu was a teacher at the Sri Aurobindo Integral Education Centre in Rairangpur. She then went on to work as a junior assistant in the irrigation and power department of the Odisha government.
She started her political career winning the election to the Rairangpur Nagar Panchayat as a BJP councillor in 1997.
In 2000, she was first elected to the Odisha assembly and went on to become a minister of state (independent charge) for commerce and industry and the minister for fisheries and animal resources development in the BJD-BJP coalition government, thereafter.
In 2004, she won a second term in the state assembly.
As transport minister of Odisha, she was credited with having set up transport offices in all 58 subdivisions of the state.
After the 2005, Murmu was outside the Odisha cabinet. She also lost the 2009 and 2014 assembly polls.
Between 2009 and 2014, she also lost three of her closest family members — her eldest son Laxman Murmu in 2009, her younger son Sippun Murmu in 2013, and then her husband Shyam Charan Murmu in 2014.
Her mother and brother also passed away during this time.
In 2015, Murmu was appointed Governor of Jharkhand and stayed in the post till 2021. She was the first woman governor of the state.
As a Santhal leader and an inspirational figure for her community and for women in general.
When the BJP government passed the Chota Nagpur Tenancy and Santhal Parganas Tenancy laws in the Jharkhand assembly, Murmu withheld her assent, after tribals opposed it over fears that it would curtail their land rights.
Murmu is a deeply religious person and a keen practitioner of the meditation techniques of the Brahma Kumaris, a movement she embraced after the tragic loss of her husband, two sons, mother and brother.
She is fluent in Santhali and Odia languages, and is an excellent orator.
MORE REPORTS