Fugitive jeweller Mehul Choksi, who is wanted in India in connection with the Punjab National Bank loan fraud case, has been captured from Dominica while trying to flee to Cuba, reports citing sources said on Thursday. 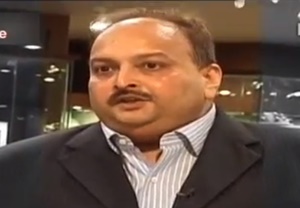 Choksi, who is under investigation over the Rs14,000 crore fraud at India's second largest state owned bank, is reported to have reached Dominica, a tiny island nation in the Caribbean, by boat. He was caught by the local police after a lookout circular was issued against him and is currently in their custody.
The Dominican government has initiated the process of handing him over to the Antigua authorities, who in turn have informed Indian investigation agencies CBI and the ED, according to reports. Sources in the CBI said his attempt to flee will make their case stronger in Antiguan courts and they are confident that he would be in India sooner.
Choksi’s disappearance came amid concerted efforts by the CBI and the Enforcement Directorate to extradite him.
Earlier this week, Choksi, 62, had gone missing from the Caribbean island nation of Antigua and Barbuda, where he had taken refuge after fleeing India in 2018. There was, however, no official confirmation from Antigua that Mehul Choksi was missing.
Antigua’s Prime Minister Gaston Browne had said he had "no reliable information till date" that Choksi fled the country. A hunt for him started after he was reported missing by a family member.
Browne told news agency ANI that Antigua will not accept him back and that he has requested PM Skerrit and law enforcement authorities in Dominica to not return Choksi to Antigua where he has legal and constitutional protection as a citizen.
Browne also said Choksi is fighting two cases against him in Antigua courts regarding extradition and revocation of citizenship. He had brought in a well-known lawyer from the UK, which showed his willingness to stay and contest the cases.
Choksi's lawyer had also denied the possibility that he would flee the country. "The family is worried about his safety. We are keeping a watch on developments," PTI quoted advocate Vijay Aggarwal as saying.
Mehul Choksi and his nephew, celebrity jeweller Nirav Modi, fled India in January 2018, weeks before the PNB scam surfaced. Later, it became known that he had taken citizenship in Antigua two months before the scam surfaced.
Mehul Choksi has claimed that the cases against him are a result of political conspiracy, and his properties in India were illegally attached by the Enforcement Directorate.
MORE REPORTS