Bill and Melinda Gates fall apart after 27 years of marriage

Billionaire couple for 27 years, Bill and Melinda Gates, have filed for divorce, tearing apart $146 billion in assets of iconic Microsoft Corporation and one of the world's largest private charitable foundations that the two co-founded. 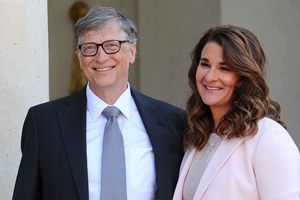 In a joint petition for dissolution of marriage filed in King County Superior Court in Seattle on Monday, the couple stated: "The marriage is irretrievably broken."
They said they have also reached an agreement on how to divide their assets, warding off speculation over division of wealth.
However, the Bill and Belinda Gates Foundation said Bill Gates, 65 and Melinda Gates,56, who co-founded the charitable trust, would continue to work together in their existing roles as co-chairs and trustees of the organisation.
The divorce filing, which comes after the youngest of their three children is believed to have turned 18, relieves the two of caring for the children. The petition also seeks approval for their agreement on division of assets, details of which they did not disclose.
"After a great deal of thought and a lot of work on our relationship, we have made the decision to end our marriage," the two said in a statement posted on each of their individual Twitter accounts.
"We no longer believe we can grow together as a couple in the next phase of our lives. We ask for space and privacy for our family as we begin to navigate this new life," they said.
With net assets of $43.3 billion at the end of in 2019, according to the latest full-year financials shown on its website, the Bill & Melinda Gates Foundation ranks as the largest private philanthropic foundation in the United States and one world's biggest.
The Seattle-based foundation has receives more than $36 billion from Bill Gates ans Melinda Gates between 1994 and 2018, the website said.
The Gates Foundation focuses on public health, education and climate. Its initiatives in the healthcare area include supporting vaccine development for infectious diseases, including  coronavirus vaccines, besides making available medical treatment and diagnostic tests.
It also engages in social and economic activities, including support for public radio and clean energy initiatives.
Gates and his wife, who is 56, have he foundation,
Billionaire investor Warren Buffett, last year, pledged more than $2 billion of stock from his Berkshire Hathaway Inc to the Gates Foundation as part of a plan to give away his entire fortune before his death.
The split comes two years after another American billionaire and philanthropist, Amazon.com Inc founder Jeff Bezos, said that he and his then-wife, MacKenzie, were getting divorced.
Gates dropped out of Harvard University to start Microsoft with schoolmate Paul Allen in 1975. Gates owned 49 per cet of Microsoft at its initial public offering in 1986. With Microsoft's explosive growth, he soon became one of the world's wealthiest individuals.
Melinda Gates, who was raised in Dallas, studied computer science and economics at Duke University. She later joined Microsoft, where she met her future husband.
In 2015 she founded Pivotal Ventures, an investment company focused on women, and in 2019 published a book, `The Moment of Lift’, centered on female empowerment.
MORE REPORTS