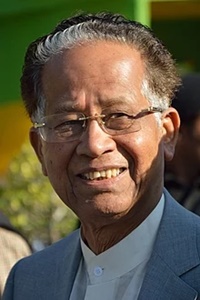 Gogoi passed away at 5:34 pm on Monday, an announcement by health minister Himanta Biswa Sarma said. His son and Lok Sabha member Gaurav Gogoi and other family members were by his side when he breathed his last.
Gogoi passed away due to multiple organ failure at the Gauhati Medical College and Hospital (GMCH).
The 86-year-old Congress veteran was suffering from post-Covid-19 complications. Over the past three months, since he tested positive for COVID-19, he had been in and out of the GMCH. After his health condition had deteriorated, he was put on complete life support.
A ten-member team of doctors from the GMCH treated him in consultations with experts from the All India Institute of Medical Sciences.
One of Assam's tallest leaders, Gogoi was CM for 15 years - from 2001 to 2016 - becoming Assam's longest-serving chief minister.
He was credited with the taming insurgency in the state. When he had taken over as the CM in 2001. His government made peace with several insurgent groups and also signed ceasefire agreements with militant groups.
Tarun Gogoi was born in 1936 into an ethnic Assamese Tai-Ahom family at the Rangajan Tea Estate in the state's Jorhat district. His father was a medical practitioner at the tea estate while his mother was the younger sister of renowned Assamese poet Ganesh Gogoi.
He graduated from Jagannath Barooah College in Jorhat and after that did LLB from Gauhati University. He married Dolly Gogoi in 1972 and have two children - Chandrima, an MBA and Gaurav, who is also a Congress leader and MP.
Rising through the ranks, Gogoi led the Congress in Assam to three consecutive electoral victories in the state. In 2012, he became the longest-serving chief minister in the state after serving for 12 consecutive years.
Tarun Gogoi started his political career as a ward member of the Jorhat Municipality in 1968.
In 1971, he was first elected Member of Parliament (MP) from Jorhat and later from Koliabor and served for six terms as MP and MLA till 2001.
Gogoi was selected joint secretary of the All India Congress Committee (AICC) in 1976, under the then prime minister Indira Gandhi. He then went on to serve the party as the President of the Assam Congress from 1986 to 1990, and was then re-elected for a second term in 1996.
Prime Minister Narendra Modi expressed grief over the demise of former chief minister of Assam.
"Shri Tarun Gogoi Ji was a popular leader and a veteran administrator, who had years of political experience in Assam as well as the centre. Anguished by his passing away. My thoughts are with his family and supporters in this hour of sadness. Om Shanti," the prime minister teeted.
MORE REPORTS