UK Conservative MP and a minister in the health department Nadine Dorries has been diagnosed with coronavirus, raising concerns about whether senior government figures have been infected. 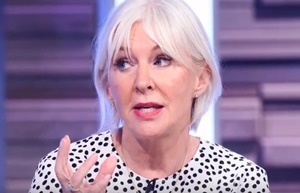 Dorries, the first MP to test positive for COVID-19, said she has taken all the advised precautions after finding out, and had been self-isolating at home, the BBC reported.
"I can confirm I have tested positive for coronavirus... and have been self-isolating at home," the Conservative MP was quoted as saying.
Health officials are now trying to trace where she contracted the virus and who she has been in contact with, according to a statement issued by Dorries on Tuesday.
Dorries, who helped craft the legislation to fight the bug, fell unwell on Friday while signing the document that declared coronavirus a notifiable disease, meaning companies could obtain insurance cover, said the paper, adding she was now believed to be on the road to recovery.
The MP for Mid Bedfordshire said in a statement that Public Health England had started tracing people she had had contact with, and the department and her parliamentary office were closely following its advice.
She later tweeted that it had been "pretty rubbish but I hope I'm over the worst of it now".
But she added she was worried about her 84-year-old mother who was staying with her and began to cough on Tuesday.
Dorries thanked the wonderful staff of Britain's National Health Service (NHS) who, she said, have provided her with advice and support.
It is not known how many meetings Dorries had attended at Westminster or in her constituency in recent days. She was at a Downing Street reception hosted by Boris Johnson last Thursday.
Health Secretary Matt Hancock tweeted that she had "done the right thing" by self-isolating at home and wished "her well as she recovers".
The news is likely to increase calls to suspend parliament, despite the government's reluctance to do so in the middle of a health crisis.
So far, six people have died in Britain from the virus, with more than 370 confirmed cases.
MORE REPORTS