US investor and philanthropist George Soros has pledged to battle the erosion of civil society in a world increasingly ruled by nationalists, whom he called "would-be and actual dictators," and beset by climate change. He also pledged one billion dollars for a new university network project to spread his vision of an open society. 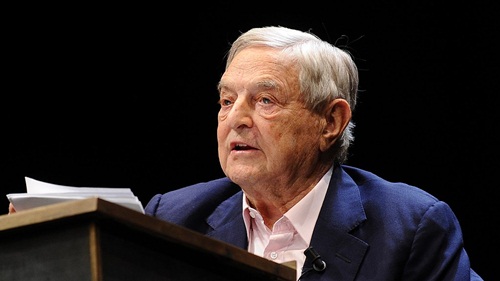 Speaking at the World Economic Forum in Davos,  Soros said the rise of nationalism across the globe was the great enemy of open society where businesses can flourish. He said humanity was at a turning point and the coming years would determine the fate of rulers like President Donald Trump, China's Xi Jinping and India’s Narendra Modi as well as the world itself.
"Nationalism, far from being reversed, made further headway." According to Soros, the biggest and "most frightening setback," came in India "where a democratically elected Narendra Modi is creating a Hindu nationalist state, imposing punitive measures on Kashmir, a semi-autonomous Muslim region, and threatening to deprive millions of Muslims of their citizenship."
On the US economy, Soros said, President Trump's economic team is overheating the economy. "An overheated economy can't be kept boiling for too long," he said. "If all this had happened closer to the elections, it would have assured his re-election. His problem is that the elections are still 10 months away and in a revolutionary situation, that is a lifetime."
"President Trump is a con man and the ultimate narcissist who wants the world to revolve around him. When his fantasy of becoming president came true, his narcissism developed a pathological dimension. Indeed, he has transgressed the limits imposed on the presidency by the Constitution and has been impeached for it," Soros said.
On US-China relations, Soros said, Trump "is willing to sacrifice the national interests for his personal interests and he will do practically anything to win re-election. By contrast, Xi Jinping is eager to exploit Trump's weaknesses and use artificial intelligence to achieve total control over his people."
He also mentioned Brexit, a humanitarian and environmental crisis in South America and the global rise of authoritarianism as major challenges. “The strongest powers, the US, China and Russia remained in the hands of would-be or actual dictators and the ranks of authoritarian rulers continued to grow,” he said.
MORE REPORTS